A Category A Listed Building in Borthwick, Midlothian 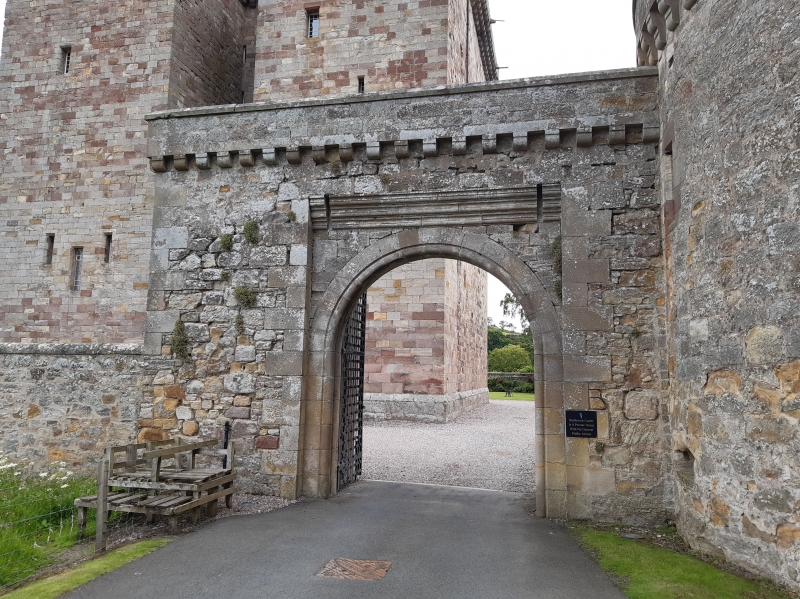 Circa 1430. U plan keep within courtyard. 3 storey and basement main block with 2 6 storey and basement wings. Grey coursed ashlar. Splayed base course; chamfered reveals; machicolated parapet with bartizans on external angles. Outer walls, gatehouse and parapet restored by John Watherston and Sons circa 1892.

An extremely good example of a complete 15th century Scottish Keep. Built by Sir William Borthwick, who bought the estate, including the Mote of Lochorwart, from the Hays of Lochorwart (now Loquhariot, the name of a nearby farm), He was granted a royal charter to build the castle on 2 June 1430, thus it replaced the now demolished Catcune Castle (situated near Harvieston House) as the Borthwick family seat. It is thought that there was originally a mote hill on the site, which must have been levelled for the present castle, which was built on the site of the bailey. Around 1892 the gate was replaced because it was too low for modern vehicles and the gatehouse was raised one floor. There was once an oblong dovecot (17th century) projecting from the south east angle of the curtain wall, and also a tower mid way along the south wall. The north section of the courtyard would have probably contained stables and outbuildings. The interior of the castle remains with little alteration, although the rooms such as the great hall would originally have been plastered and colourfully painted with allegorical scenes and motifs, inscriptions in this case including "ye tempil of honour" and "ye tempil of religion" which no longer remain. The castle has had a very colourful social history. The unusual U plan of the building seems to have provided more than just additional accommodation. In 1567 Mary, Queen of Scots and Lord Bothwell fled here from Holyroodhouse after he had killed her husband, and when their hiding place was discovered she is said to have escaped dressed as a man. There are several possibilities for the large gash in the east wall of the castle, from simple decay, which seems unlikely when the good condition of the remainder of the building is considered, to the suggestion that circa 1650 the 10th Lord Borthwick refused to leave the castle when requested to do so by Oliver Cromwell, the damage which still remains being the result. As a result of this no member of the Borthwick family inhabited the castle until 1810 when J. Borthwick of Crookston bought it back, however it was not until the end of the 19th century (see above) that the restoration began. The secure nature of Borthwick has even been of use in the 20th century as it was used as a store for national treasures during the Second World War. Since 1973 the castle has been used as a hotel.