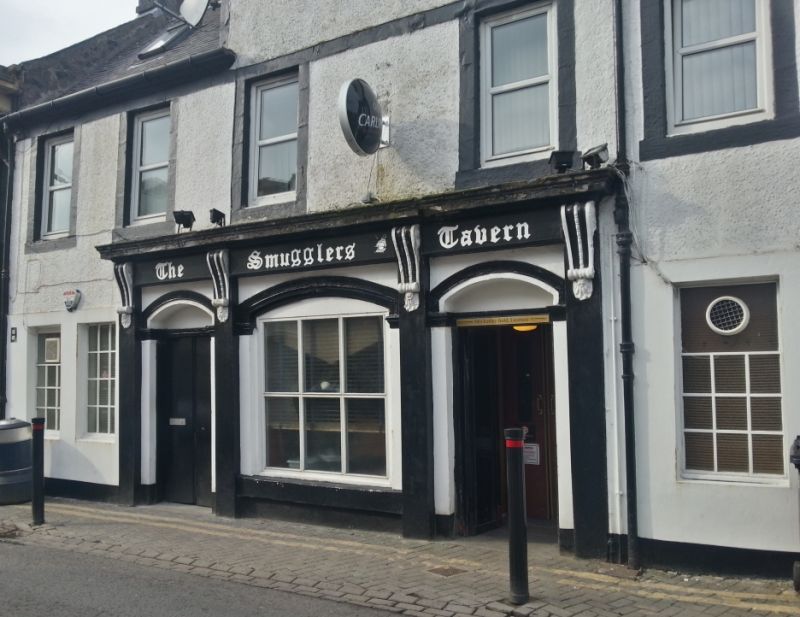 INTERIOR: nothing original survives to ground floor; 1st floor and attic not seen (2003).

In the mid to late 18th century Beith prospered not only from industries based on textile production and finishing but from a significant illicit trade in tea, tobacco and spirits. Smugglers took refuge in the town on the way from the coast with the goods to the larger centres of Paisley and Glasgow. Many of the buildings on Eglinton Street are said to have cellars to the rear (where ground falls away steeply) where the contraband was stored and it is possible that the inn was frequented by smugglers during the period.

The architectural significance of this nepus-gabled building is given added weight by its very prominent location at the centre of the town. Looking down from the Strand, at right angles to Eglinton Street, the Saracen's Head hotel terminates the view. It is also in close proximity to the Cross, at the historic heart of the town, which has another very good nepus-gabled building at Nos 24-28 (separately listed). Other comparable examples in Beith include the adjoining 14-16 Eglinton Street (though unfortunately this is less well preserved); 2-6 Reform Street; the Smuggler's Tavern at 53-55 Main Street; and 26-30 Main Street. Beith still has a fairly good proportion of these buildings, common in Ayrshire, giving the town a very distinctive character and contributing greatly to the townscape. These are important survivals of an early period of building in the town relative to the 3-bay 2-storey villa form more prevalent in the late 18th and early 19th centuries. Sadly, a number of these buildings have been demolished such as in New Street or have had the nepus gable removed such as at 21-23 Main Street (see Reid, The Story of Beith's Newspaper (2000) pp71,106 for old photographs). 19th century dormers are a common addition to this building type and are in themselves of interest being of appropriate traditional materials and scale.