A Category B Listed Building in Cavers, Scottish Borders 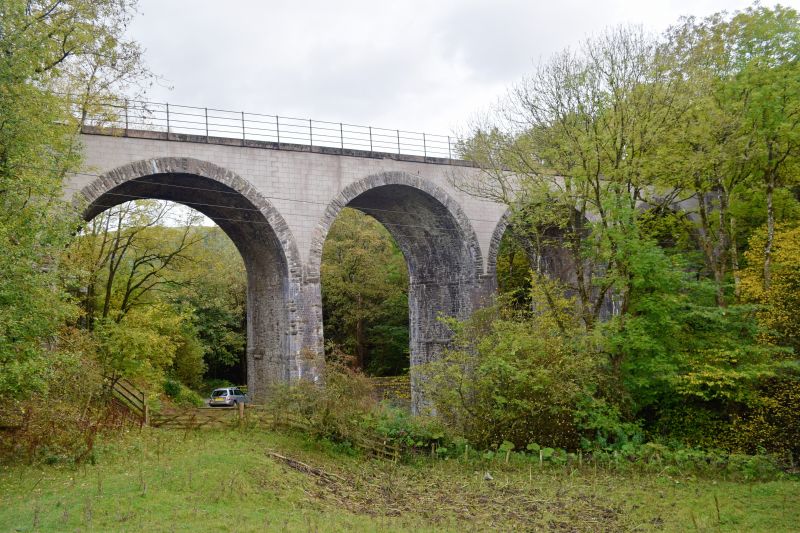 This viaduct was formerly part of the 'Waverley Route', which ran between Edinburgh and Carlisle. This particular section of line was called The Border Union Railway and was under the control of The North British Railway. Work on the line started on the 7th September 1859 with Mrs Hodgson (the wife of the NBR chairman) cutting the first sod at Lynnwood House, Hawick. Work then moved south. The line gradient rises and falls, varying between 1 in 72 and 1 in 250; there was also a speed restrictive curvature due to the nature of the terrain. Although other viaducts formerly existed on the line between here and Hawick, Stobs is now the first viaduct (sited around 4 miles south of Hawick). It is known by several names due to its location. The railway station it was nearest to is called Stobs Halt (now a private residential house with its North British Footbridge still in place), which leads to the viaduct being called Stobs Viaduct. It also crosses the Barnes Burn (a tributary of the Slitrig Water) and it is bounded on the west by Barnsburn Woods; these differently spelled names also lead to it sometimes being called Barnes or Barns Viaduct. Just before World War I, a small station to the north of the viaduct was opened. Later, during World War II, it was primarily used by a nearby prisoner of war camp and became known as Stobs Camp Station. The camp was sited to the west of the railway line and its derelict sidings can still be seen to the north of Stobs Halt. These sidings were the largest between Edinburgh and Carlisle; the signal box that controlled them had around 85 levers. The bridges and viaducts on this route are becoming fewer (due to demolition) after the closure of the line in 1969. Hermitage, Lynnwood, Teviot and Liddel Viaducts are some of the lost structures. The few viaducts and bridges which remain are good surviving examples of Border railway engineering and testaments to the builders and workers employed in their construction; they have therefore been recognised and listed.