A Category A Listed Building in Benholm, Aberdeenshire 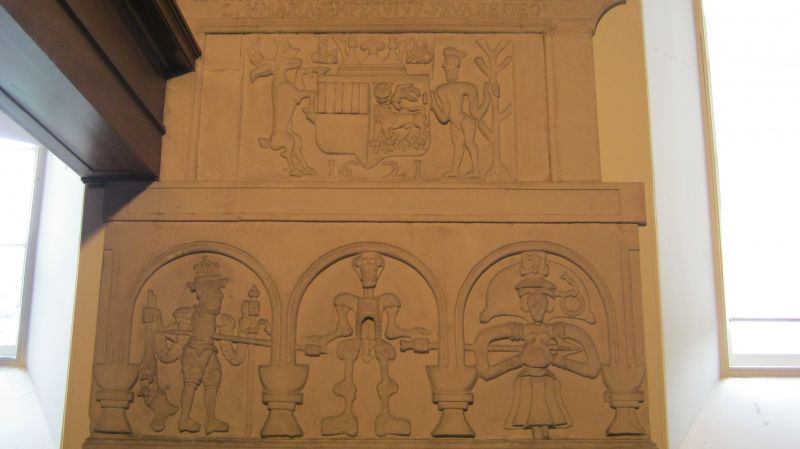 E ELEVATION: mirrors the above but with gablehead surmounted by stone belfry (bell now housed within church).

KEITH MONUMENT: 4-stage, naively carved, sandstone monument dated 1621, erected by 5th Earl Marischal and Dame Margaret Ogilvie in memory of their daughter, further fragment in graveyard (see Notes). Rectangular 1st stage depicting arcade with skeleton at centre spearing Earl Marischal (at left) holding sword and early gun, and wearing hat with 3 bobbles (not a crown), and Dame Margaret Ogilvie (at right) with oversized arms, clasped hands and wearing tall hat with plaited hair to side. Reduced 2nd stage, also rectangular, bears Dame Margaret's coat of arms surmounted by crow (reason unknown) flanked at left by hart (Keith family) but with 'woodwose' (wild man with ragged staff, linked with Knights Templar at Roslin) at right (not Ogilvie bull). Triangular 3rd and 4th stages divide into panel with Latin inscription, translated as 'Scarcely five years did she live. Thou wilt wonder her life was so complete. But to me she will be long lived who has lived well. Happy was her life, happier her death. Her last word was this ... That I may live with Christ makes it sweet for me to die. Thou are therefore a true Mary, thou leavest the earthly things of Martha. Live ever with Mary and enjoy God'. This gives way to pediment with 'EGM' '1621' 'DMO' surmounted by coat of arms of Earl Marischal bearing portcullis (see Notes), flanked by kneeling winged figures (angels?), and by helmet and crest pointing to right.

SCOTT MONUMENT: large sandstone monument with Baroque marble panel to Robert Scott of Benholm, inscribed '... Robert Scott of Benholm, who departed from the banquet of mortality and was borne into the abode of immortality in the 64th year of his age. His surviving child and his widow Dame Catherine Ellis consecrated this mausoleum, such as it is, on the 23rd January, in the year of human salvation, 1690.

Ecclesiastical building no longer in use as such. The church is upgraded to category 'A' (6 September 2005) in recognition of its rare early sacrament house and the fine 17th century mural monuments, particularly the significant Keith Monument which declares the Earl Marischal's connection with royalty (possibly the first recording of this) and his position asroyal representative in Scotland when James VI and I took up residence in England.

The first church at Benholm, a 13th century gothic style building, was dedicated to the Celtic Saint Marnoch, with the parish subsequently coming into being in 1242. The old church was finally demolished in March 1832, when gunpowder was needed to remove some of thewalls. The new church, built on sprung arches to avoid disturbing graves lying beneath the floor of the old church, was dedicated on 16th September, 1832 by Rev James Glen MA. The building w was intended to seat 768 persons, allowing just 16 inches of pew per person. The final service at Benholm Parish Kirk, by then part of the Mearns Coastal Parish, was held on 6th June 2004 and conducted by the Reverend George Hastie.

Bruce dates the salvaged sacrament house to the 15th century as it was 'a gift from the Laird of Benholm, David Lundie' (p3). The carving is, however, stylistically similar to 16th century examples illustrated in Macgibbon & Ross at Auchindoir Church in Aberdeenshire (where the flanking buttresses and surmounting carved detail is very similar), Pluscarden Priory, and Airlie Church in Forfarshire. The two 17th century monuments (see above), formerly housed in the choir of the old church, were removed to the new building at the expense of descendants of the Scotts of Benholm. The Keith monument was divided at this time, with a further stone placed in the railed enclosure immediately east of the church. The Latin inscription on this fragment reads 'Here lies Mary Keith, dearestdaughter of the most Noble Count and most illustrious Lord George Court Marischal, who died happy in the Lord, on the 14th October 1624 in the 5th year of her age'. George Keith was founder of Marischal College in Aberdeen, and his coat of arms on the monument is an early example bearing the portcullis (a badge of King James after 1603) which probably signifies his appointment as Lord High Commissioner to the Scottish Parliament in 1609.