A Category A Listed Building in Callander, Stirling 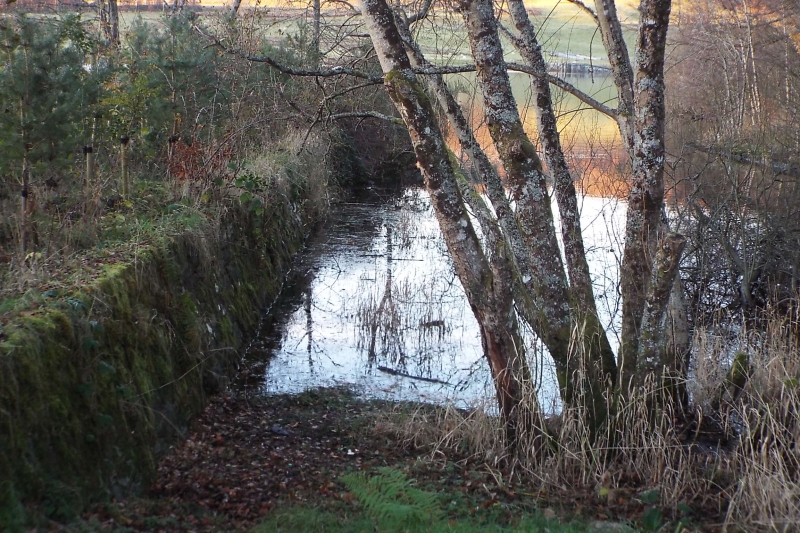 A fine and remarkably little-altered example of a mid 19th century dam with a handsome sluice house and relatively early example of a fish ladder. The sluice house has a striking presence in the surrounding low-lying countryside.

The dam was built as part of the Glasgow Corporation Water Works system from Loch Katrine (see below for significance of the scheme as a whole). Prior to the implementation of this scheme, the water from Loch Katrine fed into the River Forth via the River Teith. In order to prevent the water levels in these two rivers dropping significantly, Loch Venachar was dammed to form a compensation reservoir, its height being raised by about 5 feet. Water feeds continuously through the sluices and fish ladder into a man-made channel that drains into the Eas Gobhain river (a tributary of the Teith). The weir adjoining the sluice allows water in the Loch to feed into the original line of the Eas Gobhain.

The Glasgow Corporation Water Works system, which brings water down to Glasgow from Loch Katrine, was admired internationally as an engineering marvel when it was opened in 1860. It was one of the most ambitious civil engineering schemes to have been undertaken in Europe since Antiquity, employing the most advanced surveying and construction techniques available. The scheme represents the golden age of municipal activity in Scotland and not only provided Glasgow with fresh drinking water, thereby paving the way for a significant increase in hygiene and living standards, but also a source of hydraulic power that was indispensable to the growth of Glasgow's industry as a cheap and clean means of lifting and moving heavy plant in docks, shipyards and warehouses. The civic pride in this achievement is visible in every structure connected with the scheme, from the neatly-detailed gates and railings along its route, to the massive masonry structures and iron troughs that carry the conduit and, in most cases, have withstood without failure or noticeable deterioration the daily pressure of many millions of gallons of water for well over 100 years.

Glasgow's Lord Provost, Robert Stewart (1810-66) was the driving force behind the implementation of a municipally-owned water scheme to provide clean water to Glasgow's rapidly increasing population. Loch Katrine was identified as a suitable supply and after some objections from various parties, an Act of Parliament authorising the scheme was passed in 1855. The scheme was built in two main phases following this Act and another 1885. The 1855 scheme was opened by Queen Victoria in 1859 and was fully operational by 1860.

John Frederick Bateman (1810-1889) was chosen as the engineer for the scheme and construction work commenced in 1856. Bateman was to become one of the world's most eminent water engineers, and worked on a number of other water supply schemes in Britain, Europe and Asia. He was assisted by James Morrison Gale (1830-1905), who on the completion of the initial scheme in 1859 was appointed Water Engineer for the City of Glasgow, a post he held till 1902. Gale was responsible for over-seeing the incremental expansion of the first scheme during the 1860s and '70s and the building of the second aqueduct from 1885 onwards.