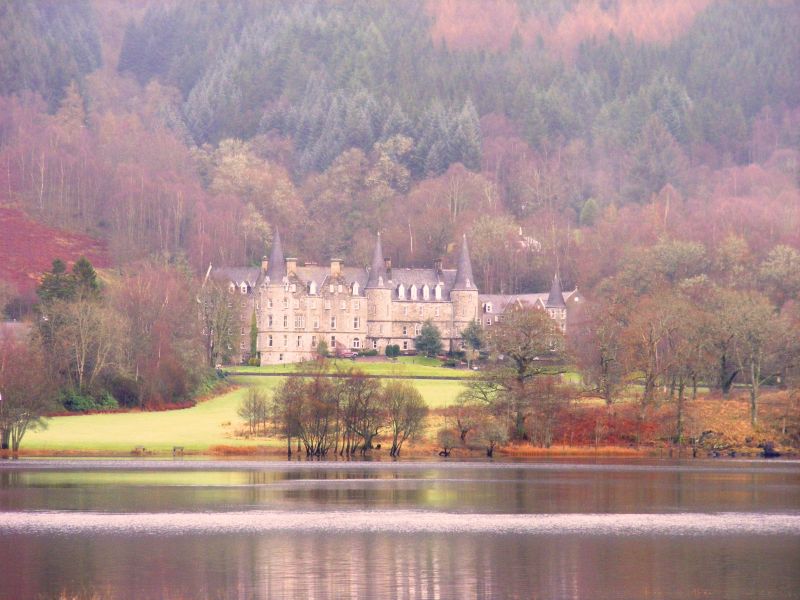 1849. Rectangular-plan 3-storey and attic hotel designed in an interesting Gothick/Baronial hybrid style with later alterations and additions. Conceived by Lord Willoughby D'Eresby with architectural advice from G.P. Kennedy. Kennedy was involved with work at Drummond Castle (seat of the Willoughby D'Eresby family), and was the architect of the nearby Trossachs Parish Church, see separate listing. The hotel fell into serious disrepair in the late 20th century. In the early 1990s the hotel was converted to holiday apartments, re-opening for tourists in 1993. The renovations carried out in 1992 included the complete gutting of the interior, the demolition and rebuilding of the 1853 E wing (its original corner tower was retained), and a large 5-storey and attic wing added to the W. Despite modern alterations Tigh Mor Trossachs stands as a striking building, dominating the landscape on the NW shores of Loch Achray. It is characterised by its imposing towers with their dramatic high candle-snuffer coned roofs. It remains a testament to 19th century tourism in the Trossachs and the associated Romantic Movement.

The building as built in 1849 only consisted of the 3-bay main S facing entrance section flanked by the slightly tapering towers at 1st and 2nd stage. The centred door is set in a squat vaulted recessed porch arranged with a segmental pointed arch. A pair of full-height roll-moulded round arched 1st floor windows are arranged above, they are interestingly articulated with keystones and a central blank panel. The wrought and cast iron porch of 1894 originally extended to the towers, only the central section survives. Near-regular fenestration to the paired towers. The E elevation demonstrates that the hotel is not particularly deep, being only 1 gable in width, giving it its distinctive lofty appearance. The rear of the 1849 block is now partially obscured by a large modern leisure centre including a swimming pool. It is still possible to see that the building is arranged with 2 flanking slightly advanced wings to the outerbays with what appears to be a later mansard roof.

As the need for more accommodation arose the hotel was extended throughout the second half of the 19th century; the E wing was built in 1853 providing a further 30 bedrooms, the basement, 3-storey and attic, 5 bay W wing including the corner tower was built in 1891.

Its later date is demonstrated by its more conventional Baronial detailing including crowstepped gables, corbelled detailing and cable knot moulding. Its side W elevation is dominated by the adjoined large modern 5-storey and attic accommodation wing. The majority of the rear of the 1891 wing is obscured by the large modern wing, the tall mullioned 3-light stair window remains.

The hotel stands on the site of a former inn, the area and inn were known as Ardcheanochrochan. The inn was a popular hostelry offering accommodation for people making their way to Loch Katrine to see the place where Sir Walter Scott based 'Lady of the Lake'. The Willoughby d'Eresbys recognised that the location of the inn would make an ideal place to build a modern hotel with a guaranteed stock of visitors who needed accommodation. It is interesting to note that the original building, without later additions, had an almost fairy tale like appearance, described by some as a Highland Camelot. The hotel was a success when opened, offering a fashionable place to stay in the Trossachs. Jules Verne however did not agree writing in 1859 'A mile and a half along the road is the Trossachs Hotel, a gloomy looking new mansion. The female visitors sat on the terrace contemplating Loch Achray, a miniature lake in a bowl of symmetry'. After extensive refurbishment and a number of extensions it is now run by the Holiday Property Bond Company, 2004.