A Category A Listed Building in Craigie, South Ayrshire 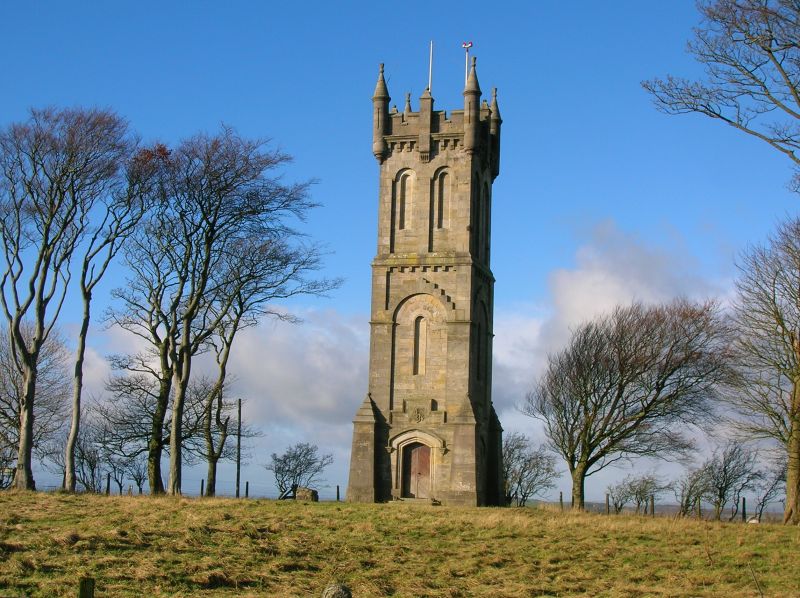 A very striking, picturesque and prominent Gothic hilltop monument built to commemorate William Wallace at the time of an upsurge in the Scottish desire for self-determination, and predating the celebrated monument near Stirling by several years. It is also known as Barnweill Monument, Barnweill Monument or Barnwell Monument. The theory that the name derives from an occasion when Wallace, standing on this elevated site, remarked that the Barns of Ayr (containing English soldiers) 'burn weil' is a myth, the real reason being that it is situated close to the remains of the medieval parish church of Barnweill, a parish that was suppressed in the 17th century.

An advertisement was placed in the Ayr Advertiser of 12 October 1854 calling for designs for the monument to be submitted to W F Love of Beith by 1 January 1855. The Ayr Advertiser of 30 October 1856 states that the monument was designed by William Dobie of Beith, and built by 'Mr Snodgrass'. The Dobies were a well-to-do professional family with antiquarian interests, and they probably provided the funds for the monument as no evidence has been found of any drives for public subscription. William Dobie certainly appears to have been capable of design himself, the family monument in Beith Cemetery bearing the inscription 'Designed and Erected by W Dobie 1866'. 'Mr Snodgrass' was Robert Snodgrass Sr, who practised as an architect-builder in Beith. He was the son of William Snodgrass, mason of Beith, and his son and grandsons followed in the same profession.