Amulree Church Of Scotland And Churchyard

A Category B Listed Building in Dunkeld, Perth and Kinross 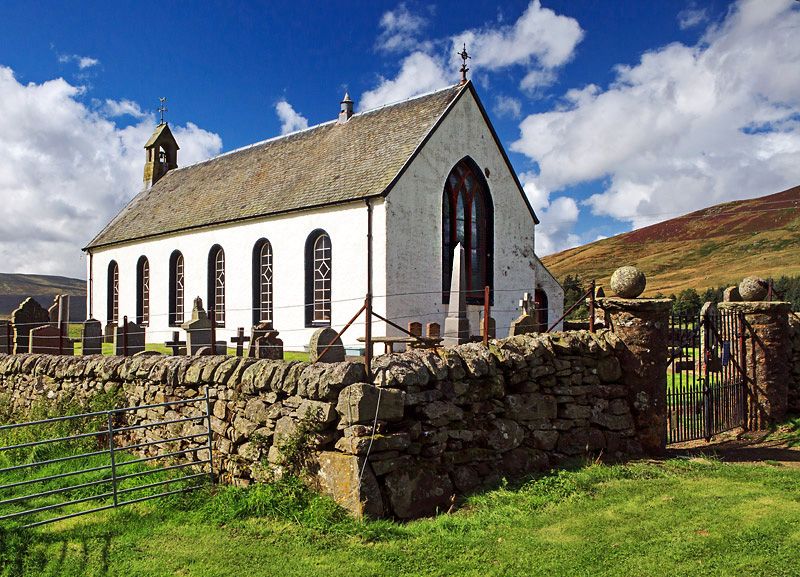 Possibly by John Douglas of Edinburgh, begun 1743, building work interrypted by the '45 ; completed 1752, with alterations and additions of 1881 and 1958. Simple rectangular-plan church with circa 1881 porch and stair tower adjoining W gable, and window to E gable. Harled with ashlar margins, grey slates, skews removed.

20th century communion table, pulpit and screen with Gothic relief carving at E end, large window above of circa 1881, depicting Faith, Hope and Charity. Subdivided in 1958 to provide Meeting Room and Sunday School beneath gallery, which was retained but enclosed, now (1991) in use as storage space.

The church was built as a chapel of ease for the Established Church between 1743 and 1752; building was interrupted by the '45 Rebellion. The site, with house and glebe was given by the heritor John Menzies of Shian, a Jacobite who was killed at Culloden. The architect was possibly John Douglas who also designed the church at Killin in 1743 and was working at Taymouth Castle in 1746. A reference is made in the Breadalba ne Papers to a "Mr Douglas" working at Amulree in 1750. On completion in 1752, the church became a Royal Bounty Station, as referred to in the OSA; the NSA of 1842 gives the minister's salary at $65, "paid entirely out of Royal Bounty". Amulree was not estabished as a parish until 1871, appearing in the Statistical Accounts for Dull and Fowlis Wester. The church was renovated in 1881 at a cost of $900 (see Groome, who maintains this was a rebuild), when coins dated 1745 were found in the rafters (see N Enniskillen). Further work took place in 1958. The church was linked with Aberfeldy in 1973; in 1991 the church is again within Dull Parish. The bell bears a Flemish inscription, cast in 1519 stylistically attributed to van den Ghein of Malines (Belgium); there are other Ghein bells in Perthshire; at St John's, Perth, Dunning and Comrie churches. Van den Ghein also cast the bell for Henry VIII's ship, the Mary Rose. Nancy Enniskillen's book gives an account of the church and parish history.