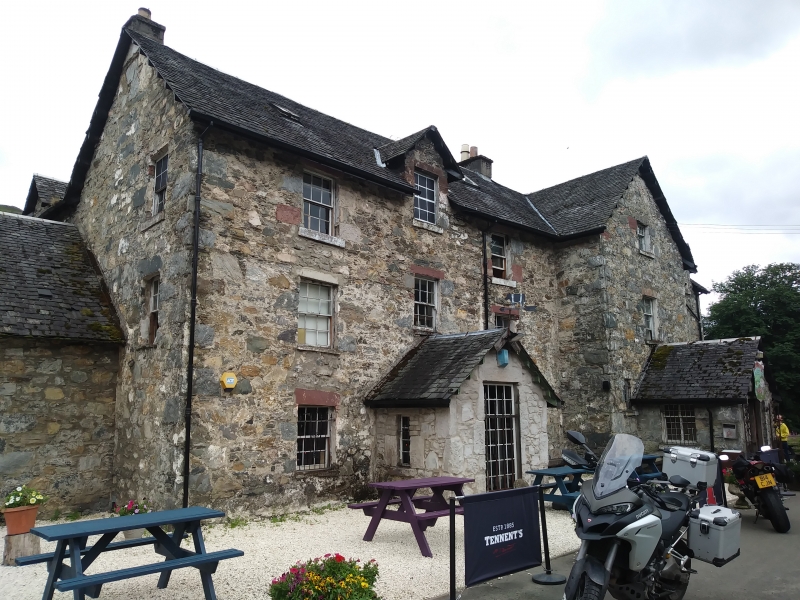 Dating from the 18th century this large Inn faces the road from Crianlarich to the head of Loch Lomond and is on the old boundary between Perthshire and Dunbartonshire. The Inn consists of a 3-storey 3-bay core with later 19th century additions (probably of 1825-30 and 1853 date), including a substantial wing to the right. The stonework is now exposed. It is a traditional building which retains much of its architectural character and is a prominent landmark in the area. The building has an interesting and diverse selection of glazing types as well as many painted dummy windows. It has a particularly long history as an Inn and is noted as such on a map dated 1776. Its likely early function as a droving inn adds further interest to its contribution to this important part of Scotland's agricultural history.

The (West) principal elevation consists of a 3-storey 3-bay section (probably the oldest part) with a central gabled dormer breaking the eaves and a central pitched roof entrance porch which probably served as the original entrance but has a window now in place of a door. To the left is a single storey wing. To the right is a 3-storey single bay projecting gabled section with a pitched roof entrance porch. To the far right is a single bay section with a pair of gabled dormers breaking the eaves. To the rear there are 2 projecting gabled wings, that to the right with a gable stack projecting further than the left and raised by a storey in 1853. There are small stacks to the North and South gables and a near-central ridge stack.

While the interior has been substantially modernised it retains much of its historic character. The original floor plan appears to survive in places. There are typical low ceilings and shutters to the windows of some rooms.

Part of a B-group with Drover's Inn Stables and Steading located opposite.

The previous list description states that the Inn may have been the original house on the Glen Falloch estate although this is now thought to be unlikely. It is probable that it housed troops during the building of the military road from Tarbet to Crianlarich by Caulfield in 1748-53. Many such barracks for road building developed into Inns and this may be the case here.