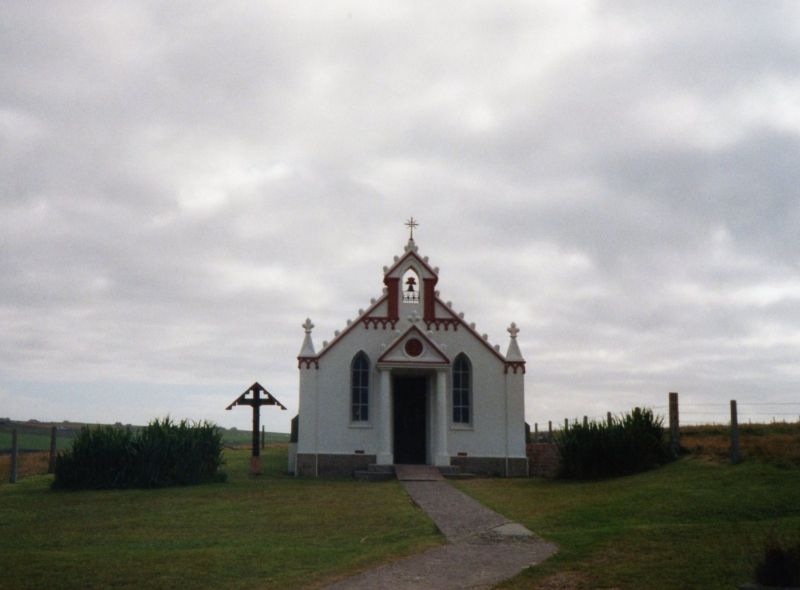 One of Orkney's most important surviving structures from the Second World War, the Italian Chapel is the only relic of Camp 60 which housed several hundred Italian prisoners. These men, captured during the North African campaign, were sent to Orkney to work on the Churchill Barriers. The Italians, led by the particularly artistic Domenico Chiocchetti, brightened their otherwise drab surroundings by planting the area with flowers, and embellishing the 'square' with a barbed wire and cement-covered statue of St George. With the permission of a new commandant, Major T P Buckland, and the encouragement of the padre, Father P Gioachino Giacobazzi, Chioccetti masterminded the creation of a Roman Catholic chapel to fulfil the spiritual requirements of the prisoners. In 1943 two Nissen huts were made available to the prisoners and Chiocchetti enlisted the help of several comrades to help him transform it. Prominent among these men were Bruttapasta, a cement worker; Palumbo, a smith; Primavera and Micheloni, electricians; Barcaglioni, Batto, Devitto, Fornaiser, Pennisi, Sforza and others. All were deft at utilising second-hand and mostly scrap materials to make their chapel, the timber for the tabernacle being salvaged from a wrecked ship. The gold curtains for the sanctuary were purchased from a firm in Exeter and paid for from the prisoners' welfare fund. Chiocchetti began work on the sanctuary, which, having been completed, rendered the remainder of the chapel somewhat dull. Consequently, a decoration scheme for the nave and the east end was commenced. The elaborate design involved painting the entire chapel in imitation brickwork and carved stone, a task too large for one man so a painter from another camp was sent to work under Chiocchetti's direction. The facade was constructed after the interior had been decorated and finally a thick coat of cement was applied to cover the unsightly corrugated-iron.

After the war, in July 1958, with only the chapel and the statue remaining of Camp 60, a preservation committee was set up to ensure a future for the now famous chapel. In 1960 Domenico Chiocchetti was traced to Moena, a village in the Dolomites and returned to Orkney for three weeks to embark on a restoration programme. With the assistance of Mr Stanley of Kirkwall, the paintwork was restored and major repairs were undertaken. In 1961 the carved figure of Christ, which stands to the right of the chapel entrance, was gifted to the island by the citizens of Chiocchetti's home town, Moena; the cross and canopy were made in Kirkwall from detailed instructions sent by Signor Chiocchetti to the preservation committee. In 1964, Chiocchetti again visited the chapel, and his wife Maria made a gift of the 14 carved timber stations of the cross. In 1992, fifty years after they first arrived on the island a group of eight former prisoners (this time excluding Chiocchetti) returned to the chapel and Mass was again celebrated.