A Category A Listed Building in Barrhead, Liboside and Uplawmoor, East Renfrewshire 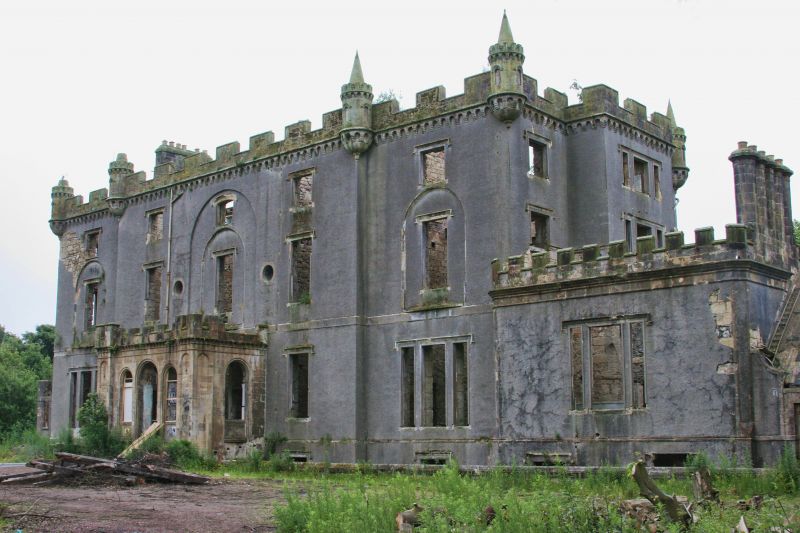 Built for William Mure of Caldwell, former MP for Renfrewshire, Baron of the Exchequer and factor for the Earl of Bute?s Scottish estates. In the early 20th century Caldwell House ceased to be a family home and in 1927 Govan District Health Board converted the building into a hospital. As a result, many severe alterations took place, such as the removal of the great stair and the addition of the large laundry building and fire escape stairs. The continued use of the building as a care home in the 20th century has resulted in the gradual erosion of the original interior. In 1995 a serious fire caused the greater part of the roof to collapse and further interior fabric was lost. The building is now in poor condition and on the Buildings at Risk Register.

The house sits in what must originally have been a designed landscape. There are specimen trees and areas of obvious planting. Historical maps illustrate avenues and areas of parkland and there remain overgrown paths with rustic stone bridges weaving through heavily wooded areas. The entrance front overlooks an area of open parkland with small clusters of trees in the picturesque manner.

In terms of its design, Caldwell is austere and perhaps even bleak. One of the Adams' later works in their early castle style and the first to be built in Ayrshire, the pepper-pot bartizans are the only surviving examples of their kind on an Adam building. The design is the third in a series produced for Baron Mure, the previous two being neo-classical in design. Mure clearly desired an imposing 'fortified' house that would mirror his status as a powerful figure in Ayrshire, and this resulted in a compromise. Some articulation and movement on the principal elevation is provided by the shallow relieving arches for which small cast-iron balconetes were intended. There is little relief on the garden front, however, which rises a full four storeys of repetitive fenestration. This elevation is monumental and the harled finish accentuates the massive quality. The crenellated parapet and small pointy bartizans are further reminders that this is a castellated structure. The later porch is large and bulky in contrast to the restrained, fairly subtle facade. Davis suggests the porch was added circa 1840 when Thomas Bonnar created his Pompeiian interiors in the hall (of which nothing survives). The typical plan consists of bedchambers for the Mures on the ground floor together with a library, circular breakfast room, drawing room and dining room. Further bedchambers are on the 1st floor though what remains of this plan is difficult to ascertain considering the current condition of the building.