A Category B Listed Building in Old Kilpatrick, West Dunbartonshire 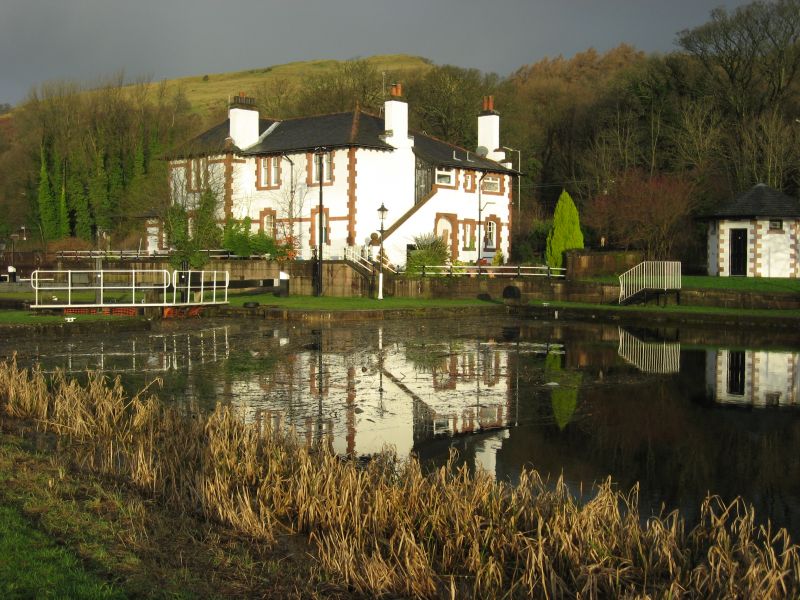 Listing Name: Customs House and Store, Including Boundary Walls and Gatepiers, Forth and Clyde Canal, Bowling

Circa 1800. 2-storey, 3-bay with attic and basement symmetrical gabled Classical style canal office and residential accommodation at strategic position at head of the western entrance to the Forth and Clyde Canal. White harl with contrasting stone margins and band courses. Forestair leads to entrance on canal side elevation. Pair of piend-roofed attic dormers. Grey slates, gable stacks. The windows are predominantly 6-over 6-pane timber sash and case.

The interior was seen in 2013. There are offices to the ground floor living accommodation above. The original room layout is largely extant and there are some internal features, including a timber fire surround, timber recess and an unusual bowed 6-panel timber door.

Boundary walls and gatepiers. Coped wall to south with pair of capped square-plan gatepiers. There is a low rubble wall to the west.

The Customs House dates to the early 19th century and is one of the most prominent and distinctive surviving buildings on the Forth and Clyde canal, which is the oldest and longest canal in Scotland. The house is situated in a commanding position at the canal's western entrance, overlooking the lower basin at Bowling and is notable for its largely externally unaltered form. The house is Classical in style and forms part of an important group of structures at the western entrance to the canal which includes the locks, later lock keepers housing and the nearby bothy (all separately listed). This retention of the original context emphasises the house's association with the canal and is an important part of its interest. Internally, the house has some interesting features such as the surviving bowed 6-panel timber door to one wall, whose original function is unknown.

The house was built to control access to the canal from the River Clyde and there is office accommodation on the ground floor with residential accommodation above. This relationship with the canal has been retained with the main entrance door facing the canal and with windows overlooking the canal to both east and west. The upper storey accommodation would have been for the lock keeper, whose job was to operate and maintain the locks. There is a later entrance to the upper storeys on the north side of the building. Boats entering the canal would have paid their fees to enter the canal at the ground floor offices. The building is larger in scale in comparison to many other residential properties on the canal and this emphasises its importance at the canal's entrance.

Bowling is the Western entrance to the Forth and Clyde Canal and it became a focal point for both national and international trade after the canal was constructed.

The Forth and Clyde Canal is the oldest and the longest canal in Scotland completed in 1790. The idea to link the east and west coasts of Scotland by a waterway was to avoid the difficult sea trade route around the north coast and was first considered in the reign of Charles II (1660-85). Surveys were carried out in 1726, 1762 and then in 1763-4 by Yorkshire engineer John Smeaton (1724-1792) who proceeded to design and oversee its first stage of construction. First called the Great Canal it was an impressive feat of engineering at 38.75 miles long and rising to 156 feet above sea level near the centre through 20 locks to the east side and 19 to the west.

The water for the canal was provided to the highest point by the Townhead Reservoir near Kilsyth and later by the Monkland Canal. As the canal was designed to link the two coasts it had to carry seagoing vessels. As a result of this it was relatively large at 2.4 metres deep and 19.2 metres wide in most places, and all the bridges were designed to clear the waterway to allow boat's masts to pass through. The bridges were first built as timber 'drawbridge' designs but by the 19th century these had been replaced by timber and cast-iron 'bascule bridges' which worked like a drawbridge and were lifted by hand-operated gearing. The major engineering projects were the aqueducts; the single-arched Kirkintilloch example by Smeaton of 1772, and the four-arched Kelvin viaduct by Whitworth of 1787-9. The latter was the largest engineering work of its kind in Britain when built.

The canal became an integral element in the industrial landscape in Scotland with the most popular cargo being coal from the ever developing mining industry in the central belt. The Canal Company allowed beneficial rates for the transport of coal for the collieries through whose land the canal was built however transport costs for other materials such as grain were charged higher and therefore more profitable. Manufacturing centres also rose up around the canal to service it and subsequently communities grew alongside the Canal in the early 19th century.

There was a significant drop in income for the canals from 1840 onwards with the introduction of the railways. The Canal had other subsidiary business interests which continued after its usage declined such as providing waste water to local industries and even to the railways who had become their main competitors in the later 19th century. A subsequent Act of Parliament in 1867 authorised the sale of the Forth and Clyde and the Monkland Canal to the Caledonian Railway, who ran both transport systems until the railway became more profitable and the canals less used.