A Category A Listed Building in Stoneykirk, Dumfries and Galloway 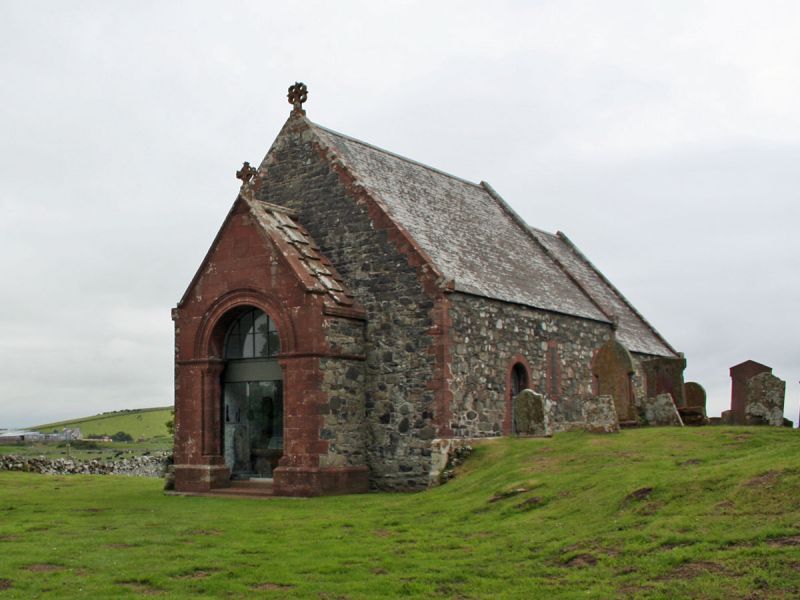 Electoral Ward: Stranraer and the Rhins

Mausoleum-chapel: This mausoleum-chapel dates to the late 19th century. It is rectangular on plan and built in a Romanesque style, with nave and smaller chancel to east. The construction is rubble with red sandstone dressings and narrow arched lights on the walls. The building has a grey slate roof with red sandstone skews and skewputts. The west elevation has a gabled entrance porch, which houses the carved stone collection (see statement of special interest). There is a cross on the gablehead apex.

Graveyard, McTaggart Memorial, boundary walls, gatepiers and gates: The graveyard comprises a collection of predominantly 19th century headstone graves with several column memorials. Particularly notable is a cross memorial on a mound to the south of the burial chapel dedicated to John McTaggart esquire of Ardwell, 18/10/1810. The graveyard is enclosed by a rubble boundary wall within which are two pairs of rock-faced square-plan gatepiers. The gatepiers at the entrance are topped by pyramidal caps.

In accordance with Section 1 (4A) of the Planning (Listed Buildings and Conservation Areas) (Scotland) Act 1997 the following are excluded from the listing: scheduled monument SM90192 (see separate designation record).

Marked as ruinous on the 1850 Ordnance Survey map, the current church was built on an early Christian site as a mausoleum-chapel by Lady McTaggart Stewart of Ardwell. The chapel was designed in a deliberate Romanesque style to reflect the antiquity of the site. The group of stones on display were discovered in the 19th century (the three oldest pillar stones were serving as gateposts and as a stile-slab in the churchyard wall) and recognised as the remains of an early Christian cemetery. Dating from the 6th to the 12th centuries AD, 3 of the stones are among the oldest Christian monuments in Scotland, only Whithorn has a stone of more ancient date. Property In Care.

In accordance with Section 1 (4A) of the Planning (Listed Buildings and Conservation Areas) (Scotland) Act 1997 the following are excluded from the listing: scheduled monument SM90192 (see separate designation record).