A Category C Listed Building in Minnigaff, Dumfries and Galloway 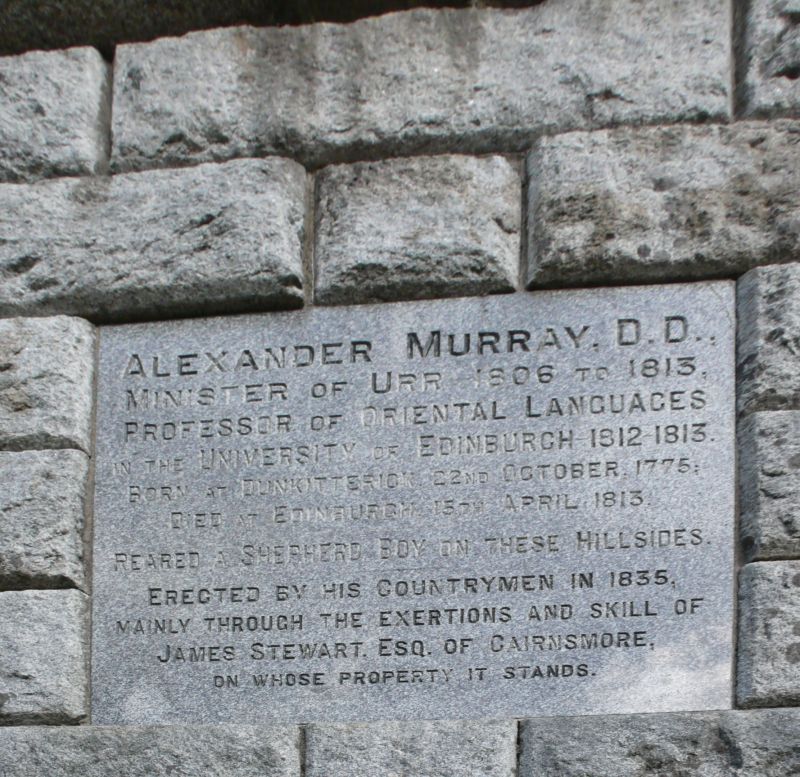 1835. Obelisk monument. Rusticated granite. Truncated apex. Corniced pedestal. Chamfered base. Polished granite panel to S face of pedestal, inscribed 'Alexander Murray, DD, Minister of Urr - 1806 to 1813, Professor of Oriental Languages in the University of Edinburgh - 1812-1813. Born at Dunkitterick, 22 October, 1775, Died at Edinburgh, 15 April 1813. Reared a Shepherd Boy on these Hillsides. Erected by his Countrymen in 1835, mainly through the exertions and skill of James Stewart, Esq of Cairnsmore, on whose property it stands.'

The monument was erected in 1835 to commemorate Alexander Murray (1775 - 1813). The panel was inserted and the inscription added in 1877. A committee was appointed in Edinburgh in 1833 to erect the monument, and the design was submitted by John Parker, an Edinburgh lawyer. The monument was constructed by William Hume, James Thomson and Robert Hume, with James Stewart of Cairnsmore superintending the building work. The monument is circa 80 ft high. The monument is situated near Murray's birthplace, Dunkitterick Cottage (NX 5022 7173), which is now ruinous; the cottage is commemorated by an inscribed boulder erected in 1975 by the Galloway Association of Glasgow.