A Category B Listed Building in Clydesdale East, South Lanarkshire 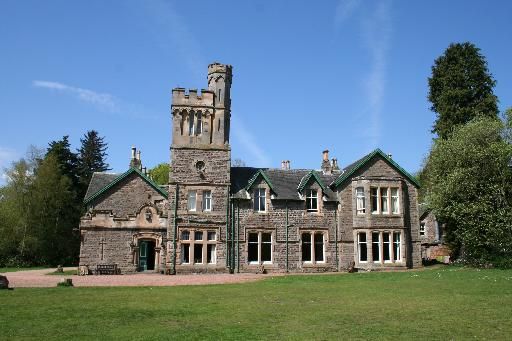 segmental over door, arrow-slit motif to left, tripartite window with

bipartite to 2nd, quatrefoil oculi to 3rd, round-headed single and blind windows with corbel table and crenellated parapet to 4th, crenellated cap-house to right; 2 bays slightly recessed to far right each with segmental-headed bipartite window to ground floor and gabled

gables with various doors and windows to offices at main elevation.

original joinery including boarded and panelled rooms, doors and

light over landing with stained glass.

Wiston Lodge was built by James Ferguson, and extended by his niece

and husband, Mr and Mrs Johnston-Ferguson in the late 19th century.

The concert hall was added by the subsequent owner (from 1913), a

Mr McGregor, who also endowed the Robertson and Wiston churches,

and built the village halls. The house was purchased by the YMCA in 1945 for a holiday and conference centre. The little-altered interior of Wiston Lodge is an important feature of the building.