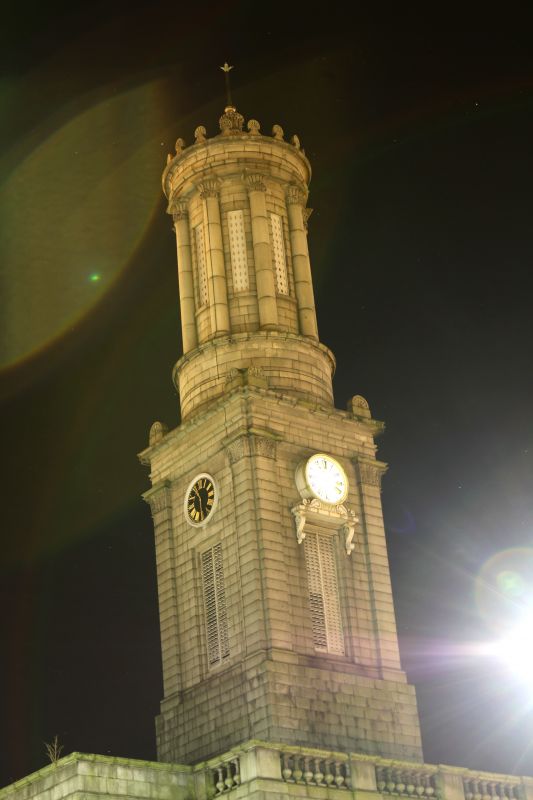 This landmark former church forms the focal point of King Street and is situated on a prominent corner site. It is an outstanding example of Greek Revival architecture and is a notable work by the celebrated architect John Smith. The building is especially distinguished by its grand entrance portico and distinctive tower. The use of the Lysicrates Monument as the top stage of the tower is particularly unusual and striking.

The Arts Centre was built as the North Parish Church in the Parish of St Nicholas. The site was in the heart of the parish and was considered to have the necessary commanding position. The church was converted to an Arts Centre in 1963.

King Street developed after 1794, when a town council meeting asked the engineer Charles Abercrombie to find a way to connect the original steep, muddled Medieval streets of Aberdeen to the surrounding countryside. His plan was for two streets, one of which would run from Castlegate to the Denburn and the other which would run from the Castlegate to the North of the town. The latter was King Street. A competition for designs for this new street brought forward a design from Thomas Fletcher. This was to be a long classical façade, with a pedimented centrepiece and this design was begun on the East side in 1805. The idea of a standard, uniform terrace, however, was abandoned when negotiations had to be entered into with owners regarding the length of the frontages and the heights of the buildings.

John Smith was the city architect of Aberdeen and along with Archibald Simpson, was largely responsible for the classicizing of Aberdeen city centre.

The Greek Revival Movement was especially fashionable in the 1820s and 30s and this church was at the height of that fashion. The movement reached its zenith in Scotland with buildings such as the High School in Edinburgh and Playfair's Surgeon's Hall.

The Choragic Monument of Lysicrates in Athens was built in 334B.C. to commemorate a win in a choral festival. One of the first Greek monuments to be built according to the Corinthian Order, it became an icon in the Greek Revival Movement of 1820s-30s Britain. Lord Elgin negotiated unsuccessfully for it in 1829. The Lysicrates Monument was used as a motif in other Greek Revival buildings, especially monuments, as at the Burns Monument in Alloway (see separate listing).