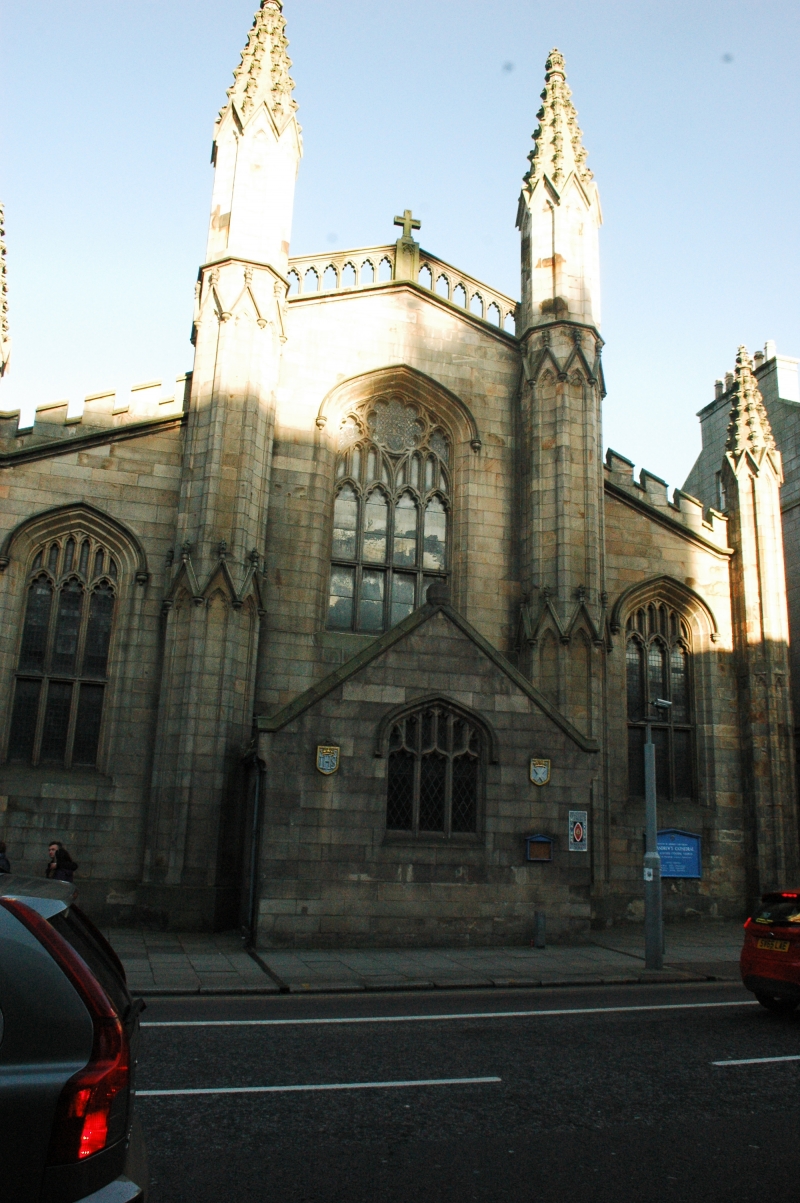 : Ecclesiastical building in use as such. Built by the renowned local architect Archibald Simpson this was one of the first buildings to be built on this section of the newly planned King Street. With work by the important architects, Simpson, Street and Lorimer, Saint Andrew's Cathedral is a notable building. It is particularly distinctive for its use of sandstone on the principal elevation, a rarity in the granite-dominated city. The quality of detailing on the entrance elevation, such as the fine tracery windows is exceptional. The building has a fine interior scheme by the distinguished architect Ninian Comper. Originally built as a Church, it became a Cathedral in 1914. The church originally had a gallery, which was removed in 1909

The church has a close link with the American Episcopal Church, as the latter claims its foundations from Aberdeen. After the American Wars of Independence, the church in America, which was Anglican was separated from the English church and its Bishops could no longer be consecrated in England. Samuel Seabury, elected as Bishop in America was therefore consecrated in Aberdeen in 1784 by the bishops of the Scottish Episcopal Church. In gratitude, the American Church wanted to build a large Cathedral in Broad Street in the 1920s, with Sir Ninian Comper as architect. The Wall Street Crash, however, prevented these plans and Comper was commissioned instead to redecorate the interior of the existing cathedral.

Archibald Simpson (1790-18470 was one of the major architects involved in designing the expanding nineteenth century city of Aberdeen. He designed many of the important works in the city including 5 Castle Street and The Music Hall (see separate listings).

John Ninian Comper (1864-1960) was one of the finest 20th century church architect and designers. Born in Aberdeen, his output consists mainly of internal church furnishings and stained glass

King Street developed after 1794, when a town council meeting asked the engineer Charles Abercrombie to find a way to connect the original steep, muddled Medieval streets of Aberdeen to the surrounding countryside. His plan was for two streets, one of which would run from Castlegate to the Denburn and the other which would run from the Castlegate to the North of the town. The latter was King Street. A competition for designs for this new street brought forward a design from Thomas Fletcher. This was to be a long classical façade, with a pedimented centrepiece and higher end blocks. This design was begun on the East side in 1805, with the creation of nos 8-10 (see separate listing). The Episcopalian community bought the central feu of this part of King Street and instead of the originally intended classical structure, envisaged by the designers, they chose to build this Gothic Church.