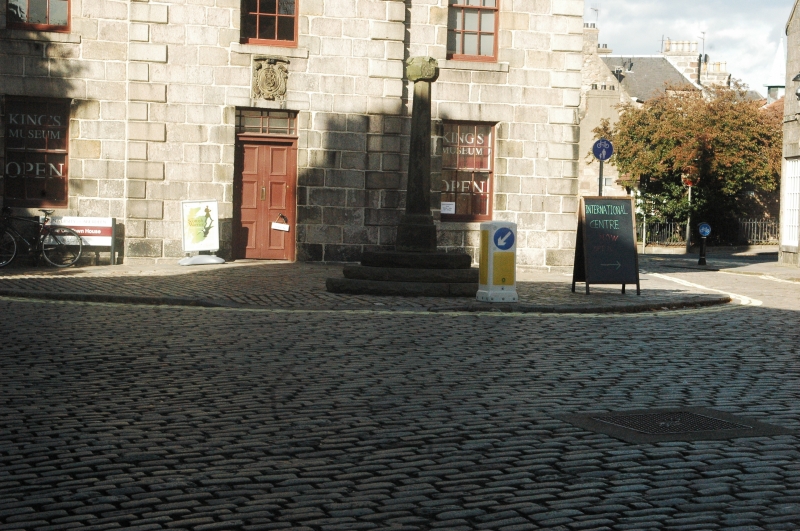 A market cross was erected in Old Aberdeen when it became a Burgh of Barony in the late 15th century. The surviving original parts of this cross suggest that it may date to the first quarter of the 16th century.

The only remaining original part of the 16th-century cross is the knop, decorated with four coats of arms including that of Bishop Gavin Dunbar (1518-32) surmounted by the remains of crouching beasts. The shaft was renewed in 1951, and the stepped base is modern.

In 1724 the market cross was described as having an image of the Virgin engraved on the north and south sides of the top of the cross as well as having coats of arms of the kings of Scotland and three Bishops; Dunbar, Stewart and Gordon. The Council of Old Aberdeen sold the cross in 1788-9, but a fragment was discovered in a smithy in Old Aberdeen in 1841. In 1951 this fragment was erected on top of a shaft in front of St Mary's Church, High Street, by the University of Aberdeen. It was transferred back to its current and original location in 1993. Part of its special interest is that it incorporates a significant architectural fragment of the original 16th-century market cross of Old Aberdeen, erected by Bishop Gavin Dunbar (1518-32), whose other building works, including the Greyfriars and the heraldic ceiling in St Machar's cathedral, are still evident in the city.