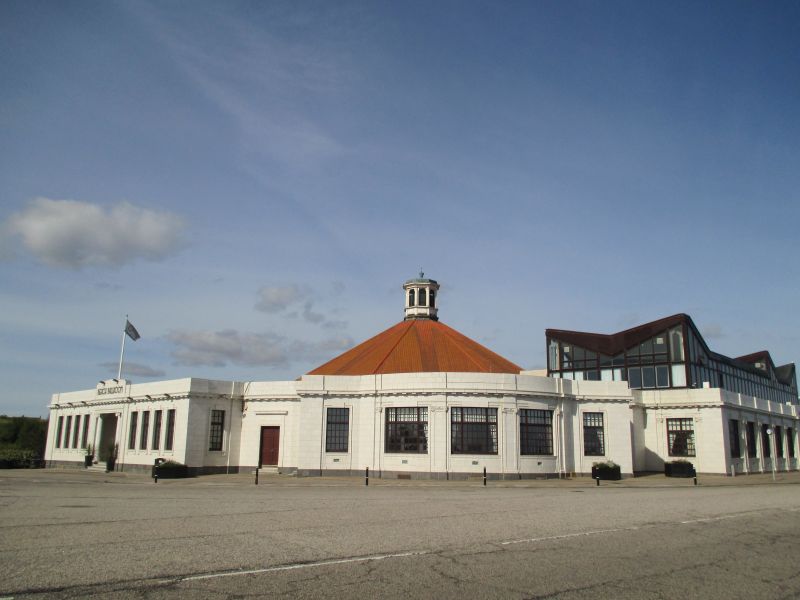 The Beach Ballroom is an unusual design and a rare survival. It was built as part of the 'Beach Improvement Scheme', at a cost of £50,000, to the winning design in a competition held by Aberdeen Town Council. The official opening on 3 May 1929 took the form of a masked ball and carnival with costumes ranging from Louis XIV's Court to Sioux Indians and shepherdesses. During World War II the building was commandeered by the Military, and re-opened at 23 December 1946. The ballroom floor, which floats on 1400 steel springs, was originally made of maple and was re-layed after the war. Opened in June 1963, the Star Ballroom, with its distinctive roof form and use of timber and glass, was almost certainly designed by City Architect George M Keith. Square columns in the Northern Lights Suite were moved toward the outer wall in order to provide support for the new ballroom. During the 1970s a £150,000 renovation was undertaken; the work took two years to complete and included lowering the ballroom ceiling. A fire in 1993 caused damage to the stage which was originally semicircular, but was altered to its current rectangular form possibly during the 1970s. The dance floor shape has also changed from a central octagon it now extends to the stage.

When it first opened, the building was managed jointly by the town council and John Henry Isles from 1 June 1929 for three years, after which is reverted solely to the town council.