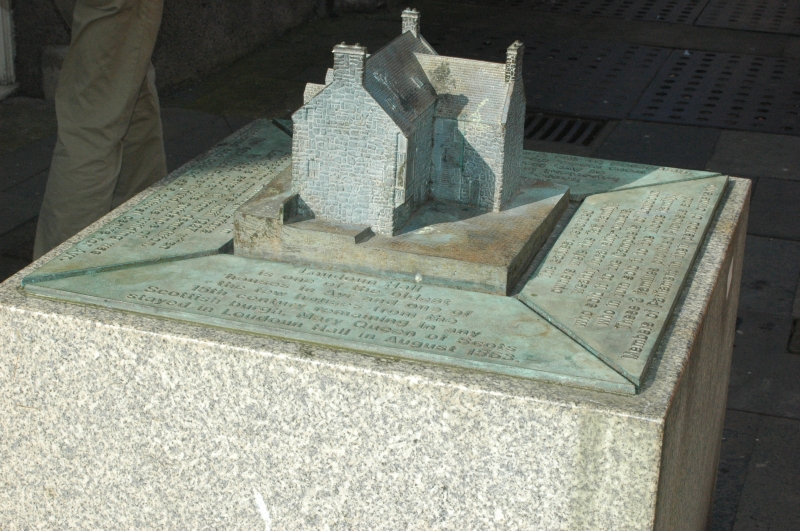 Built circa 1513 by James Tait, a wealthy burgess of Ayr. Between 1528 and 1539, ownership passed to Sir Hugh Campbell of Loudoun, Sheriff of Ayr, and subsequently sold to the Crown for 14,000 merks in 1622. Circa 1633, the office was granted to James Chalmers of Gadgirth, who represented Ayr in the Scottish Parliament from 1628-1633. Loudoun Hall was then sold by James Chalmers' son in 1666 to John Muir of Park, Provost of Ayr. Following 1700, there were numerous owners, in part due to increasing deterioration of the building. Finally, its owners ceased to inhabit it and it became a slum, rescued from slum clearance in the twentieth century by the Marquess of Bute, restored 1948 by the architect Robert Hurd, who gave his services for free. Hurd's alterations included the removal of an 18th century staircase tower, and the erection of a new staircase, made from the materials of an oak stair removed from Culzean Castle, and originally made from the timbers of the third Marquess of Ailsa's yacht, Marquesa (recently removed). An architectural model of the Hall stands to the entrance of Boat Vennal, off New Bridge Street. Loudoun Hall is not only the oldest house in Ayr, but provides an outstanding example of one of Scotland's few surviving examples of domestic burgh architecture of the 16th century. Re-landscaped Loudoun Hall boundary wall and forecourt, a collaboration between architects Reiach and Hall, and artists Gordon Young and Louice Lusby Taylor. Recent building restoration work by ARP, Lorimer and Associates.