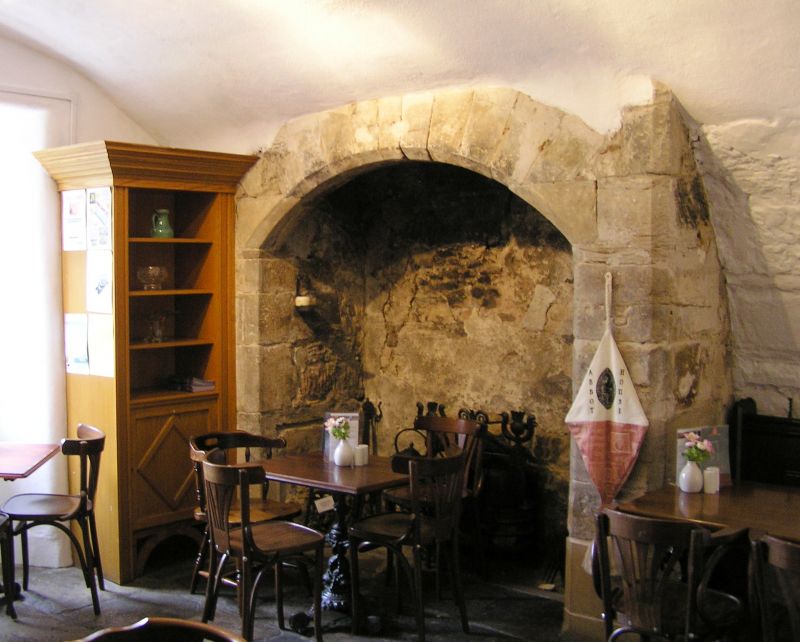 Interior: retains many interesting features relating to various phases of building's history from 15th to 20th century. 3 barrel-vaulted chambers and remains of 4th to ground floor, thought to have been constructed during the rebuilding of the house in 1570's; large early segmental-headed fireplace to one; smaller early fireplaces to two; turnpike staircase to each of stairtowers. Small early fireplace and adjacent recess to ground floor of later 17th century lean-to extension to east of north stairtower. Remains of former external window of previous 15th century structure with Gothic foiled tracery and mullion to 1st floor of north wall of original block (prior to construction of lean-tos). Dry closet set within same wall further east. Fragments of mural paintings (thought to illustrate scenes from Virgil) of 1570's to main room on 1st floor. Stone segmental archway with keystone (originally external and thought to have perhaps covered a viewing platform connected with an external wooden gallery) to 2nd floor to north of south stairtower. Original dog-leg staircase with moulded risers and solid newel to east wing; moulded stone fireplace surround to 1st floor chamber; walls and ceiling of chamber covered in mural depicting wartime bombing raid, painted by Alan Ronald in 1941. Ceiling of upper level gallery with mural depicting the history of Dunfermline, painted by Alasdair Gray in 1995.

A substantial early townhouse (incorporating workshops at ground floor and later converted to a tenement) retaining a number of significant early features. The existence of the remains of a 15th century window in the original north wall proves the existence of a pre-reformation building on the site. Whilst there is no evidence that this was the residence of the Abbot of Dunfermline (the earliest reference to 'Abbot House' is in the 19th century) it would appear that the property stood within the grounds of the monastery. The original (probably rectangular-plan) structure appears to have been rebuilt probably in the later 16th century to more or less the same dimensions with a vaulted ground floor and stairtowers added to the north and southeast. Since the southeast stairtower did not communicate directly with the rooms on the east side galleried access seems the only reasonable explanation; a former external stone arch at 2nd floor level just to the north of the southeast stairtower may have sheltered the gallery access at this level and possibly have provided the foundation for a viewing platform above. There is some dispute about who was responsible for the rebuilding of Abbot House - James Murray of Perdieu and Robert Pitcairn, Commendator of the Abbey being leading contenders. For most of the 17th century Abbot House appears to have been in the possession of the Earls of Dunfermline. It was during this time that most of the subsequent extensions were added, including the lean-to additions to either side of the north stairtower, the infill section to the north of the southeast stairtower and the east wing (the latter probably dating from the late 17th century). The 17th century inscription above the main north entrance to the main block on Maygate derives from the poem 'The King's Quair' by James I. Between 1672 and 1699 the house is thought to have been rented by Lady Anne Halkett, a herbalist, physician and Jacobite supporter. Archaeological excavations have shown that the ground floor of the building was used as workshops (probably for small scale metalworking) rather than domestic accommodation from the 15th to the 19th centuries (with a break during the 17th century). An absence of any significant addtions/alterations from the 18th century onwards suggest that the building declined in status during this time. It was in multiple ownership during the 19th century. The east wing was purchased by the Carnegie Dunfermline Trust in 1908/09 (and subsequently used as a craft school), followed by the main block in 1948. During the Second World War the east wing was used as a naval officers club and then as the headquarters of an air training corps (it was during this period the 1st floor murals illustrating bombing raids were painted). Following the renovation of the building in 1961-63 it was opened as meeting rooms for public hire and as the headquarters of the Dunfermline Presbytery. Dunfermline Heritage Trust was set up in 1989 to convert it to a heritage centre and it was opened as such in 1995. Renowned Scottish novelist and artist Alasdair Gray was commissioned to create a ceiling mural for the upper gallery. His 'Thistle of Dunfermline's History' (1995) depicts the timeline of the town in the form of a tree of life with branches dividing the centuries. Shaft fragments from a former Market Cross, reputed to be of 17th Century date, have been re-erected with a modern base and unicorn capital in the east garden.