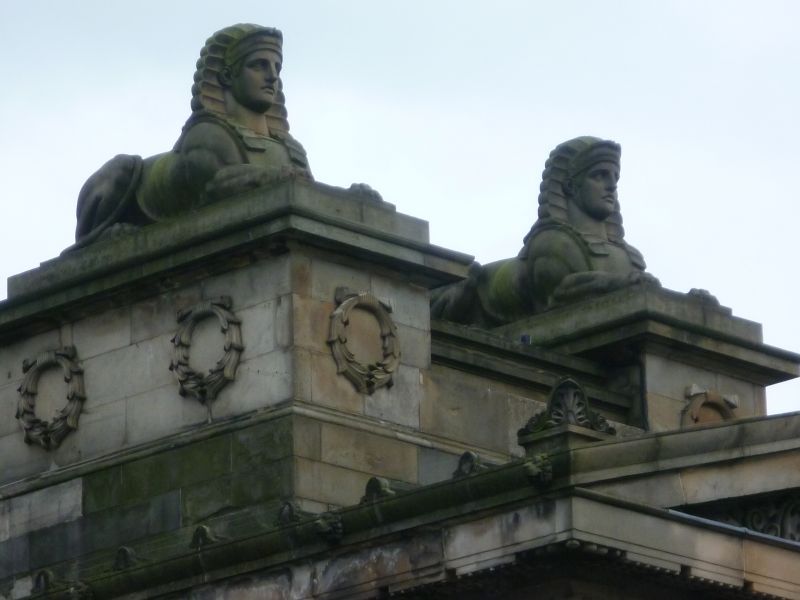 INTERIOR: marble staircase leads to a series of inter-related galleries.

Erected by the Board of Manufactures and Fisheries, and providing accommodation for the Royal Society (to the W), the Institution for the Encouragement of the Fine Arts (to E) and the museum of the Society of Antiquaries (central top-lit galleries). Playfair's original design, illustrated by Shepherd, had shallow octastyle porticoes to N and S, 8 columns between pilastered corner blocks with battered pedestals intended for sculpture and a plain parapet above. According to Grant, the construction of the building involved driving 2,000 piles into the ground to stabilise the foundations. A painting by Alexander Nasmyth shows the building under construction in 1825, with the fluted columns being erected under the supervision of Playfair. In 1837 the Royal Institution for the Encouragement of the Fine Arts commissioned John Steell to carve 8 sphinxes and the colossal statue of Queen Victoria with crown and sceptre, 'her robes draped so as to give a general idea of Britannia' for the roof of their building. Steele went to Windsor to make preparatory studies for the Queen's likeness. The Queen requested a model of the building be sent to London so that she could study the proposed position for her statue. A drawing by Playfair indicates that a statue of Britannia with a reclining lion, was originally intended. By the end of the 19th century the museum of the Society of Antiquaries had moved to Queen Street (National Portrait Gallery), the Royal Society to 22-24 George Street, and the new Edinburgh College of Art had been built. In 1911-12 the interior of the building was adapted, with the addition of upper level galleries and coved concrete ceilings (by LG Mouchel and Partners) to provide accommodation for the RSA (previously housed in the National Gallery building) by WT Oldrieve of the Office of Works. The building is at present (2001) in the process of refurbishment, and an underground link to the National Galleries of Scotland, which will provide access from East Princes Street Gardens, a cafe and bookshop is under construction.