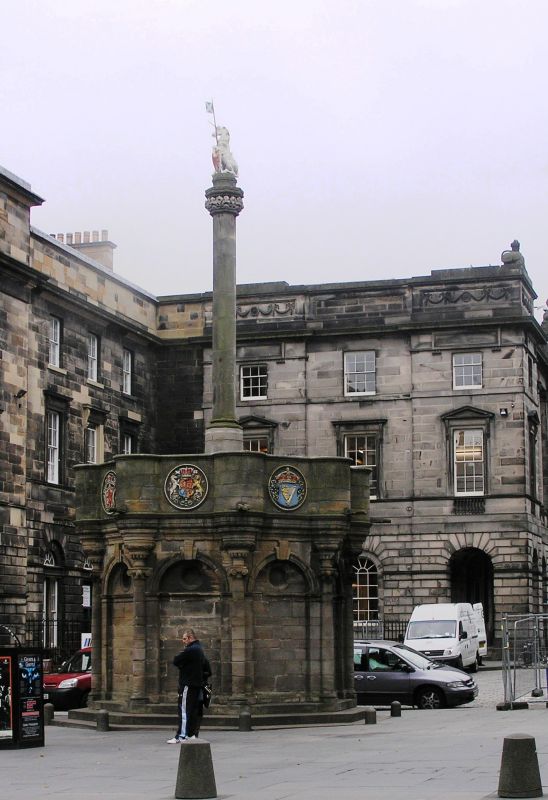 Edinburgh's Mercat Cross is a fine late 19th century reconstruction and re-imagining of its predecessors. It occupies a particularly prominent and sensitive location on the High Street in front of the W side of Parliament Square, beside St Giles Kirk. Representing the centre of social and civic life in the City throughout the centuries, the current Mercat Cross is of considerable contextual and historic interest and offers significant group value with the buildings that surround it.

The shaft and capital head are 1970 replacements of the original 15th century fabric, removed at that time to protect them from further deterioration. Both had been used in a previous rebuilding of the Cross in 1617 by John Tailefer and John Mylne. In 1866 the shaft and capital were erected on a simple stepped base near the present site. The unicorn was added in 1869. The self-consciously artisanal octagonal drum designed by Sidney Mitchell in 1885 was intended to be a replica of Tailefer and Mylnes reconstruction, taken from one surviving 18th century engraving. The renowned Edinburgh-based architect Sydney Mitchell was one of the country's finest 19th century architects, whose reputation has increased in recent years. The completed work, incorporating the 15th century shaft and capital, was gifted to the town by British Prime Minister, William Ewart Gladstone who also composed the Latin inscription above the main door of the octagonal drum. The painted panels includes the Arms of Edinburgh, copied from a panel of the 1617 cross. Other panels from the earlier cross, depicting human heads, also survive. These are currently built into a wall at Abbotsford House in the Scottish Borders. The cross was repaired by the City Architect's Department in 1970.