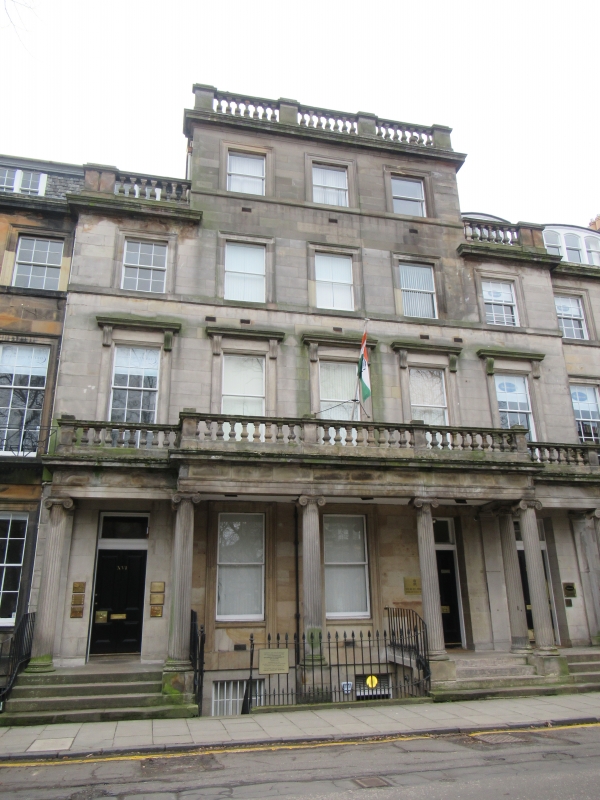 8-BAY LINK BLOCK TO LEFT (NO 14 AND 15): window in each bay at basement, except those beneath entrance platts; even 2-2-2 fenestration pattern separating porches with timber panelled doors and large rectangular fanlights (lying pane to No 14) at ground floor in bays 3 and 6; regular fenestration at 1st and 2nd floors; pair of segmental arched bipartite dormers to right of centre; box dormer with 2 bipartites spanning bay to outer right and bay to outer left of adjoining centrepiece.

8-BAY LINK BLOCK TO RIGHT (NOS 19 AND 20): identical arrangement to left link block, with doorways instead of windows in 2 bays at basement, and 4-pane lying-pane fanlights to both doors at ground floor; 6 evenly disposed segmental arched dormers, tripartites to 2 bays at left, bipartites to 2 central bays and bipartites set in mansard roof to 2 bays at right.

5-BAY TERMINAL BLOCK TO OUTER LEFT (NOS 12 AND 13): timber door with segmental arched fanlight at basement in bay to centre; blocked window in bay to outer left; windows in remaining bays at basement; architraved and corniced doorpiece with deep-set timber panelled door and 4-pane rectangular fanlight at ground floor in bay to outer right and penultimate bay to left; window to remaining bays at ground floor and to each bay of upper floors.

NW ELEVATION: advanced central bay with door at ground floor and windows to each floor above, flanked by single small window, top 2 floors.

Part of the Edinburgh New Town A-Group, a significant surviving part of one of the most important and best preserved examples of urban planning in Britain. Archibald Elliot planned the Rutland Square/Street scheme in 1819 for James Stuart, an assertion supported by its appearance on John Wood's 1823 version of the map first published by Thomas Brown in 1820, several years before its actual completion. John Learmonth bought the ground in 1825 and developed it from 1830, his architect, John Tait working to Elliot's plans and adopting the giant Corinthian pilaster motif at the entrance to the Square (1 Rutland Square/28 Rutland Street and 32 Rutland Square/27 Rutland Street, listed separately). Rutland Street does not survive completely as intended (owing to the construction of the Caledonian Station/Hotel and alterations to the rear of St Thomas' Church - see separate list descriptions). Rutland Square, however, remains intact and, together with the remaining portions of Rutland Street, forms an important survival of 19th century planning in Edinburgh. 15 Rutland Square was the town house of the architect Sir Robert Rowand Anderson. On his death in 1922 the house, which contained Anderson's library among other things, was bequeathed to the Institute of Scottish Architects (now the RIAS) which Anderson founded.