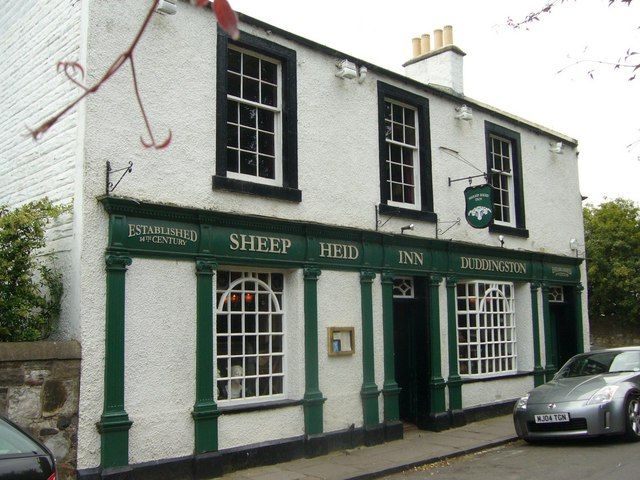 The Sheep Heid Inn is situated in a prominent position on The Causeway and is an important element in the Duddingston villagescape. It has a good public house elevationt with crisp Classical details which dates from about 1900. It is also of considerable historic interest.

The core of the building appears to be 18th century. Although the interior has been subject to numerous alterations and refittings, the external appearance has survived with little change to its overall character. The inn originally consisted of the block facing north and the south leg which was a house and two cottages, the latter two being recast in the early 20th century.

The skittle alley is one of the earliest in the country and although the present building dates from 1880, it is thought that an earlier alley stood on the site. The history of the game of skittles can be traced back to the ancient Egyptians however organised skittles played indoors was formalised towards the end of the nineteenth century with club constitutions being drawn up and an Amateur Skittles Association being formed in the UK.

Internally the bar with its unusual free-standing columns is Edwardian. The gantry was altered in the late 1930s to accommodate the mirrors above though parts of it may have been retained from an earlier fitting. The room to the left was originally two snugs.

The history of the pub dates back to 1360 when the first inn on this site is recorded and it may thus be the oldest licensed premises in the country. The name is thought to be derived from the ram's head snuff box presented to the proprietor of the inn by King James VI in gratitude for providing refreshments when he travelled between Craigmillar Castle and Holyrood Palace. (This snuff box was auctioned in the 19th century when it was acquired by the Earl of Rosebery). During the 19th century a number of eminent literary figures frequented the pub, including Sir Walter Scott and Robert Louis Stevenson while a number of clubs and organisations such as The Royal Company of Archers, the City Sheriffs and the local regiments used it as a gathering place. The Trotters Club of which many late 19th and early 20th century literary and artistic figures were members, has met here and played skittles since the foundation of the club in 1882.