A Category B Listed Building in Falkirk, Falkirk 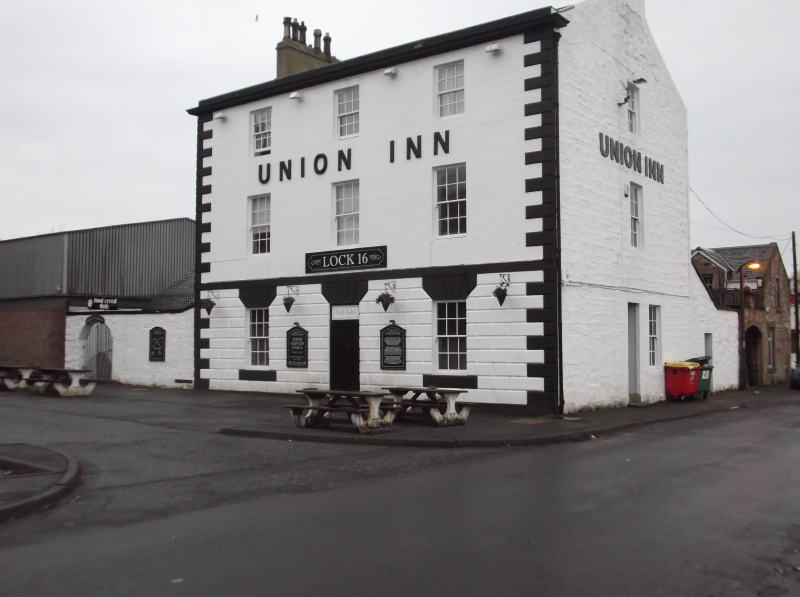 Circa 1822 with later alterations. Tall 3-storey and 3-bay public house in Classical style with rounded stairtower and paired outshoots to rear prominently sited to the side of the Forth and Clyde Canal. Painted ashlar and rendered principal façade facing east with rusticated base course and quoins. Rubble gabled and rear (that to north painted). Ashlar front with rusticated ground floor and quoin ends. Later 20th century toilet block and conservatory to south gable.

INTERIOR: The interior was seen in 2013. Timber panelled bar interior with L-plan bar and corniced back bar. Cast iron columns with decorative capitals. Rear stair leading to first floor with plain interiors with some 6-panel doors to upper floors. Top floor has separate access via internal stair to rear.

The Union Inn is a good example of an early 19th century trading post inn prominently sited to the side of the Forth and Clyde Canal which is the oldest and longest canal in Scotland. It retains its context and relationship with the canal system that it was built to serve. When built it overlooked the large Port Downie canal basin at the head of the 11 lock ladder at Camelon, a very important and pivotal trade point where lock 16 of the Forth and Clyde and the Union Canal join. It is likely the Inn was built in conjunction with the completion of the Union Canal in 1822. The Union Canal was built predominantly for trade, however, passenger boats called 'swifts' were also very popular and travelled at scheduled times from Edinburgh to Falkirk where many passengers then alighted to change their journey to the Forth and Clyde Canal or elsewhere in Scotland by stage coach. The Union Inn was predominantly used by passengers waiting for the boats to negotiate the 11 lock ladder at Camelon.

The Forth and Clyde Canal is the oldest and the longest canal in Scotland completed in 1790. The idea to link the east and west coasts of Scotland by a waterway was to avoid the difficult sea trade route around the north coast and was first considered in the reign of Charles II (1660-85). Surveys were carried out in 1726, 1762 and then in 1763-4 by Yorkshire Engineer John Smeaton (1724-1792) who proceeded to design and oversee its first stage of construction. First called the Great Canal it was an impressive feat of engineering at 38.75 miles long and rising to 156 feet above sea level near the centre through 20 locks to the east side and 19 to the west.

The water was provided to the highest point by the Townhead Reservoir near Kilsyth and later by the Monkland Canal. As the canal was designed to link the two coasts it had to carry seagoing vessels. As a result of this it was relatively large at 2.4 metres deep and 19.2 metres wide in most places, and all the bridges were designed to clear the waterway to allow boat's masts to pass through. The bridges were first built as timber 'drawbridge' designs but by the 19th century these had been replaced by timber and cast-iron 'bascule bridges' which worked like a drawbridge and were lifted by hand-operated gearing. The two most major engineering projects were the aqueducts; the single-arched Kirkintilloch example by Smeaton of 1772, and the four-arched Kelvin viaduct by Whitworth of 1787-9. The latter was the largest engineering work of its kind in Britain when built.

The canal became an integral element in the industrial landscape in Scotland until 1840 onwards when there was a significant drop in income for the canals with the introduction of the railways. It had other subsidiary business interests which continued after its usage declined such as providing waste water to local industries and even to the railways who had become their main competitors in the later 19th century. A subsequent Act of Parliament in 1867 authorised the sale of the Forth and Clyde and the Monkland Canal to the Caledonian Railway, who ran both transport systems until the railway became more profitable and the canals less used.

The Union Canal was authorised through Act of Parliament of 1817 and completed in 1822. It is therefore the last of Scotland's great canals to be built and benefitted from the experience gained from building the other canals. Its principal purpose was to bring coal as well as limestone, ironstone and sandstone into Edinburgh from the rich deposits of these minerals in Falkirk and West Lothian. It was also hoped that the canal would attract passenger traffic. It was funded through a combination of subscriptions collected before the project began and shares sold afterwards. The eventual cost was almost double Baird's original estimate. It is Scotland's only contour canal following the ground at a height of 240 feet above sea level for its entire 31½ miles until it reaches the west end where there was a series of (now buried) locks near Port Downie on the Forth & Clyde Canal. A year after its completion the canal was extended westwards to reduce the distance passengers were required to walk between the two canals.

Rectangular range to the rear was previously not linked to the inn and is not included within the listing.