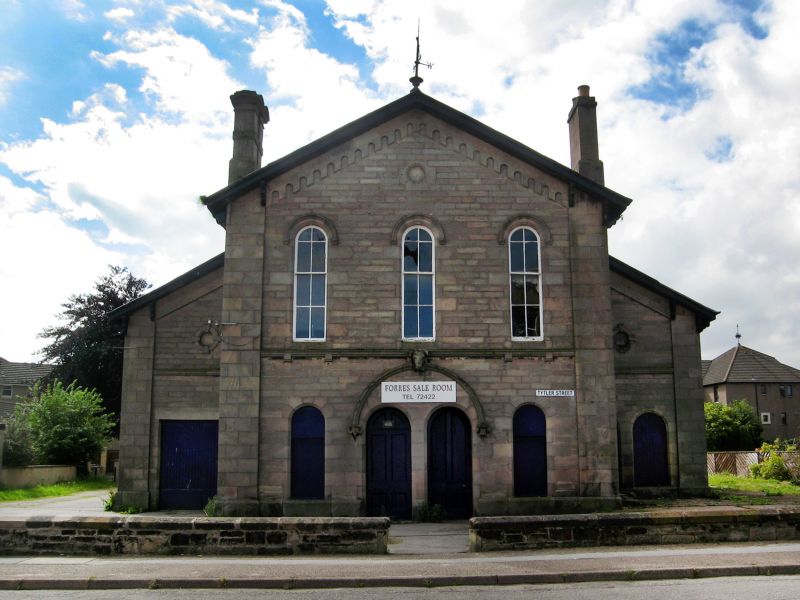 Hamilton's Auction Mart was designed by A and W Reid in 1867, as an agricultural hall for the Forres and Northern Fat Cattle Club. The surviving part of the building is the two-storey, three-bay Lombardic style gabled and corbelled entrance to Tytler Street with single bay returns. It is constructed in stugged and coursed stone with polished ashlar dressings. There is a base course, square quoins, a moulded band course between the ground and first floor and a corbelled eaves course.

A pair of round-headed entrances with timber doors are set under a large hoodmould decorated with carved heads of a bull, a sheep and a sheaf of corn with a potato and turnip designed and carved by Arthur Goodwillie. These entrances are flanked by tall round arched windows. The first floor has three round arched windows with moulded hoodmoulds and square hoodstops. There is a blind roundel in the apex of the gable. The single bay returns have narrow round arched openings at the ground and first floor. Each return is topped by tall, chimneystacks. That to the east return is the original pair of decorative chimneystacks with an arched cope. The stacks to the west return have been replaced and only the stone base appears to survive. Fragments of the slate roofs survive. The openings have been boarded up and it is not known if the timber window frames and doors survive.

Hamilton's Auction Mart was designed as an agricultural hall for the Forres and Northern Fat Cattle Club. In February 1867 the club applied to the town's Feuing Committee for ground on which to build a hall (Banffshire Journal and General Advertiser, 12 February 1867). By March the club had established the Agricultural Hall Company Ltd and secured the Tytler Street site with plans for the building drawn up by the Elgin based architectural practice, A and W Reid (Inverness Courier, 28 March 1867).

The building was principally designed to hold the club's annual show, started in 1865 and held on Market Green, off Bridge Street (the original location for the hall as suggested by the feuing committee). As the show was held in December the committee wanted a building so that the show wouldn't be cancelled by the weather. Newspaper accounts indicated it could also be used for by local groups for concerts, shows, a drill hall and storage.

The building was completed in time for the 1867 show and the Forres, Elgin and Nairn Gazette, Northern Review and Advertiser of 20 November 1867, gives a detailed description of the building. The front part of the building was designed to accommodate the Club Secretary's room on the west and a stair on the east.

The rectangular-plan hall at the rear (demolished 2016) was 135 by 52 feet with over moveable iron cattle cribs in the centre and along the sides. A U-shaped gallery was designed for showing seed, grains and farm implements. The gallery was supported on columns that rose to support the king post roof. The roof had full length strip windows to provide natural light and ventilators.

The agricultural hall is shown on the 1st Edition Ordnance Survey Map (surveyed 1868, published 1895), adjacent to a railway siding to provide good transport links for the show. The building was still known as the Forres Agricultural Hall in the late 19th century. A newspaper advert of 1891 advertising the hall for sale notes that it accommodated a cattle market.

The footprint of the building largely remained as built until the hall and side wings of the front block were demolished in 2016. The 2nd Edition Ordnance Survey map (revised 1904, published 1905) shows an octagonal sales ring (also demolished in 2016) had been constructed immediately to the east of the hall and a rectangular plan building to the south of the hall, both are shown with pens.

By the 1930s the building was in use as Hamilton's Auction Mart and is marked on a 1966 Ordnance Survey map as an Auction Mart. It is not known when the building ceased to operate for the sale of cattle but in the early 21st century it was used for the sale of furniture. Newspaper adverts from the early 20th century indicate that there was a furniture auction salesroom on Tytler Street so it may have been in used as this for some time.

Hamilton's Auction Mart meets the criteria of special architectural or historic interest for the following reasons:

Most of the decorative exterior stonework at Forres Agricultural Hall is on the principal street elevation and this continues to survive today. It has good Lombardic style corbelled, gabled and round arched detailing, and other architectural features such as decorative band and eaves courses and moulded hoodmoulds. The classical proportions and form of the building are largely retained in the three-bay gabled elevation with arched openings, although this has been affected by the loss of the side wings. The use of classical architectural styles was popular for buildings associated with the trade of agricultural goods, such as corn exchanges, cattle markets and market halls. Photographs of the building taken in 2007 show that the gable was topped by a weathervane cast at Walter Macfarlane's Saracen Foundry, Glasgow.

The building was designed by Alexander Reid (1816-97) and William Reid (1825-93), the nephews and pupils of William Robertson of Elgin and they inherited his practice following his death in 1841. They were a prolific architectural practice with work ranging from private villas to churches and prominent public buildings. They were accomplished in the neoclassical style, as can be seen in their design for this hall, as well as the Falconer's Museum on Tolbooth Street, Forres (listed at category B, see LB31747).

The original building has been significantly altered by the loss of the rear hall which in design terms was plainer and more functional that the front elevation. However, its loss has not completely diminished the special interest of the surviving front block which is the most architecturally distinguished part of the complex.

The interior of the surviving part has not been seen and cannot be assessed. Photographs taken in 2006 show that the front part of the building has a flagstone floor and a stone quarter-turn staircase to the left of the entrance, with a plain metal balustrade and timber handrail. There is an office on the first floor with vertical timber boarding to a dado height. The most decorative detailing was known to be the hall, as the gallery fascia was decorated with stencilled farm animals and sheaves of corn and the iron balustrade was ornate.

This former agricultural hall is one of the earliest surviving buildings on Tytler Street and its scale and level of architectural design make it an unusual building in the streetscape. It is almost opposite a hotel (not listed), which was built slightly before the agricultural hall. Newspaper accounts record that this is where the agricultural society would hold some of their meetings and stay during the annual show.

Most of the street is characterised by 19th century villas, and there are 20th century buildings at each of the street, including a flatted building immediately to the northwest of the former agricultural hall. Historic Ordnance Survey maps show that Tytler Street has been a mix of commercial buildings and residential properties and it remains as such today. Later development in urban settings is typical.

The hall was built adjacent to a railway siding (as can be seen on the 1st Edition Ordnance Survey Map), and this no longer survives. Good transport links are important in transporting animals and goods to shows and markets and many agricultural auction marts are built very close to railway stations for this reason. The location of Forres itself was also convenient and centralised to serve a large agricultural area. The loss of the railway siding has affected our understanding of the historic setting, but the removal of obsolete railway lines is not unusual.

Scotland's biggest agricultural show is that organised by the Royal Highland and Agricultural Society of Scotland, who held their first show in 1822 in Edinburgh. However, it was not until 1960 that it was held at Ingliston on the outskirts of Edinburgh, with purpose-built exhibition halls.

Although the building has lost the rear hall it is still representative of its building type. There are a number of similar listed building types where only the frontage remain, such as the former cattle market in Valleyfield Street in Edinburgh, built in 1868 (listed at category C, see LB45915) and the cattle market at Graham Square in Glasgow, mostly dating to 1875 (listed at category B).

In terms of age, Forres Agricultural Hall is early for a building associated with the showing and selling of cattle. Transport improvements, particularly the railways from the 1840s, led to weekly markets in towns and cities, with cattle markets and auction marts typically located close to railway stations.

Surviving cattle markets and auction marts are a rare building type, with just over ten listed, and those that survive largely date to the late 19th century. One of the earliest examples is that at Newton St Boswells, built in 1872 (listed at category B, see LB51565) The outbreak of foot-and-mouth disease in the United Kingdom in 2001 led to the closure of many cattle auction marts and markets and many are now used for over purposes.

The northeast of Scotland was a rich agricultural area, as it was one of the largest areas for breeding store cattle for the southern market in the whole of Scotland. Buildings associated with agricultural are an important part of the area's social history. The survival of the hall is of significant social historical interest for what it can tell us about agriculture and the farming community as well as the trading and showing of agricultural stock in the 19th century.

Category of listing changed from B to C and listed building record revised in 2020.