A Category A Listed Building in Fraserburgh, Aberdeenshire 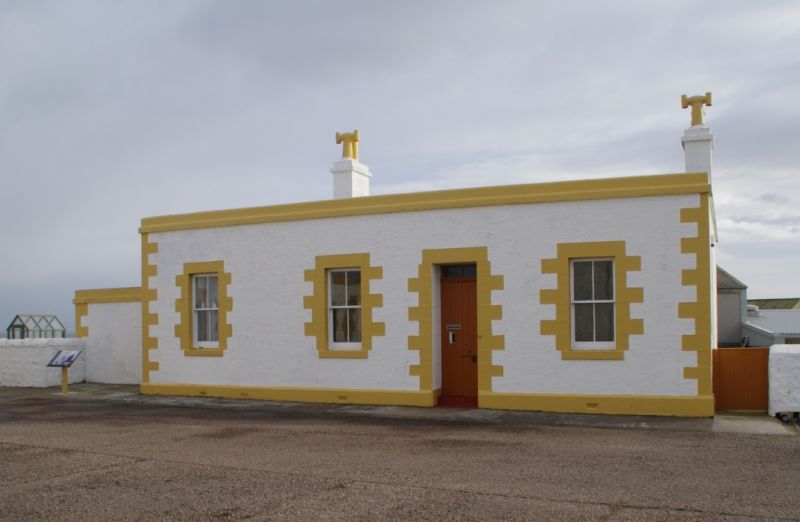 A complex of buildings including a 4-storey tower house with integral lighthouse, three former keepers' cottages, an engine house and a fog horn, situated on a cliff site at the north of Fraserburgh. The site is now a museum (2016). The tower house is likely to have been built by Sir Alexander Fraser of Philorth around 1570 and contains a circular lighthouse within its northeast side with the domed lantern section projecting through the roof. The lighthouse was first built in 1787 by Thomas Smith and remodelled in 1824 by Robert Stevenson. The tower house is harled rubble with a corbelled parapet and with round bartizans at the corners and square bartizans at the centre of the elevations. The lighthouse is situated within the tower house and is a granite ashlar tower with a projecting lantern. The lantern has two encircling walkways above a ground floor, each with metal railings. The lower walkway is corbelled. The glass of the lantern above is diamond paned.

The window openings are irregularly spaced and there is a large window to the stair tower. The windows are mostly timber sash and case with 6-over 6-pane glazing pattern. There are some smaller windows.

The interior was seen in 2016. The lighthouse tower has an internal stone spiral staircase with metal balusters and a timber handrail. The lantern holds a large circular brass frame which supports the lens. The basement is vaulted. The other rooms were converted into keeper's accommodation in 1830s and have 6-panel timber doors.

The former keepers' cottages and the engine house lie to the north, southeast and south of the lighthouse. The pair of cottages to the southeast date from 1824 and the others from 1902. All are single-storey, symmetrical, flat-roofed buildings in white, harled, coursed rubble with contrasting mustard margins. All have a base course, blocking courses and quoins. The 1824 cottages have central, hexagonal chimney stacks.

A coped rubble boundary wall lies to the east, west and south of the keeper's cottage to the south.

The windows are mostly timber sash and case with a 4-pane glazing pattern.

The interiors were seen in 2016. The former houses retain small rooms with some 4-panel timber doors and carved fire surrounds.

A fog horn built in 1902 is situated to the north of the site, on the cliff edge, facing out to sea. It is a concrete semi-circular structure with a metal horn on its roof.

Kinnaird Head Castle was probably founded in the early 1570s by Sir Alexander Fraser, 8th Lord of Philorth to protect the new Fraserburgh harbour. It was acquired by the Northern Lighthouse Board in 1786 (Walker et al. 2015).

The former Kinnaird Head lighthouse was originally constructed in 1787 for the Northern Lighthouse Board by the Edinburgh engineer Thomas Smith. It is constructed within the northeast side of the tower house of the former Kinnaird Head Castle. The Canmore record notes that the older lighthouse was largely of a timber construction and the whale lamps within could cast light for up to 14 miles. The 18th century lighthouse was replaced in 1824 by Robert Stevenson, who built the current lantern and lamp and reconstructed the stair tower within the castle. The light was replaced in 1851 by Alan Stevenson and again in 1902 by David Stevenson.

David Stevenson also built the fog horn and the engine house which works it. He also built a new house for the principal keeper.

The lighthouse was decommissioned in 1991 and an automated light constructed to the north.