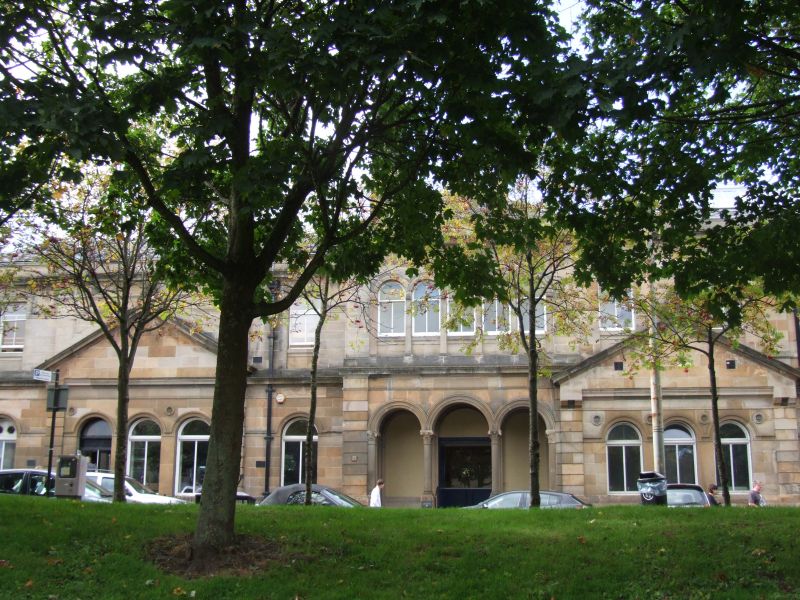 John Burnet Senior, 1871, with later additions (see Notes) including 1875 (Turkish Baths); and additions by A Myles of 1893; and B Conner of 1902. Important example of a Classical style baths complex, with Italian Renaissance influence to detail. 2-storey, 9-bay, polished ashlar, round arches to all ground floor openings mostly arranged in groups of 3.

Arlington Baths Club is an outstanding and early example of an early private members swimming baths, with Turkish Baths and other facilities, for it survives largely as it was built in the late 19th and early 20th century. It has a good interior and was designed by one of the leading architects of the period. It is reputedly the oldest private swimming club in continuous operation in Britain since it opened its doors in 1871, and is one of seven surviving baths in Britain dating from the 1870s remaining in use.

Arlington Baths was an exclusive club aimed at Glasgow's rising middle-class. It formed a part of Glasgow's Charing Cross and West End expansion of the city, which was becoming an increasingly desirable area to live.

Originally, in 1871, there was a swimming pool, or pond, with a suite of adjacent private baths connected in a single storey elevation. By 1875 these were extended to the rear to include Turkish baths, and later a reading and billiard room by 1893. Shortly afterwards the grand classical entrance hall was added. By 1902 upper storeys were added to the private baths area, resulting in the elevation presently seen on Arlington Street (2013).

William Harley was the first to offer indoor baths in Glasgow, at Willowbank in 1804. Swimming became increasingly popular as a sport and pastime during the late 19th century and swimming clubs were established to cater to the professional classes who were becoming more aware of the benefits of exercise and general health and wellbeing. New pools being built were enlarged, to accommodate the shift from plunge pools to large swimming pools. The Arlington Baths Club proved so successful that its membership topped 600 by 1875. Thus a wave of successive clubs opened in Glasgow such as the Western Baths at Hillhead. Edinburgh got its own club in 1884 with the opening of Drumsheugh.

The architect John Burnet Senior was largely self taught and started his practice in 1843 where he worked largely in the Alloa-Clackmannan region. He received many commissions in Glasgow with his designs for his Greek Revival styled Elgin Place Congregational Church (now demolished), and would continue to emulate classical architecture in numerous commissions in his career, including the Arlington Street Baths.

Category changed from B to A and list description updated as part of the sporting buildings thematic study (2012-13).