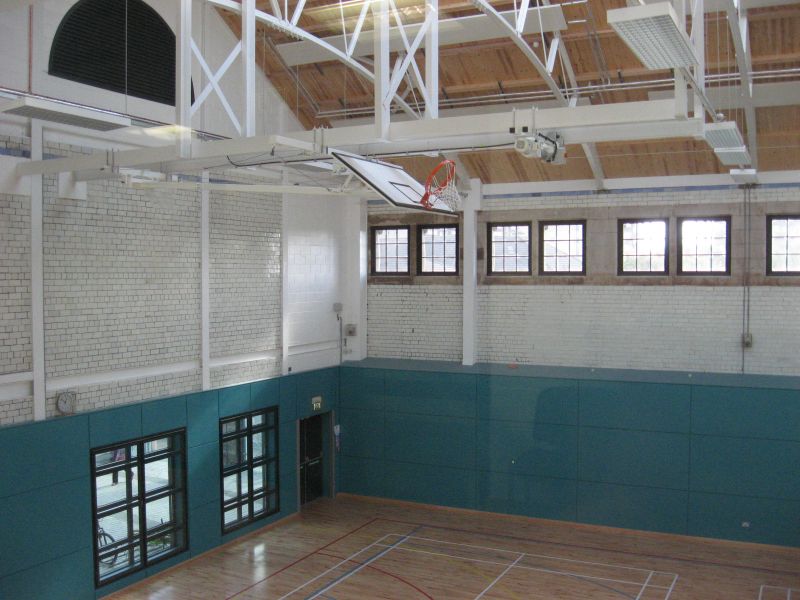 The former Maryhill Public Baths and Washhouses is an important part of the streetscape in this area of Glasgow and a good example of an increasingly rare building type. It tells us much about the city's social history. Between 1876 and 1914 20 baths and washhouses were opened in Glasgow and only a handful now survive. Located on a prominent corner site, the exterior of the building has good Baroque detailing. While the interior of the building has been adapted to meet new requirements, the exterior is little altered. It remains linked to Maryhill Burgh Halls (now Maryhill Community Centre, see separate listing) to the East by an arcade which was part of the ground floor of a tenement building.

Maryhill Public Baths opened on 30 May 1898. In 2006 the swimming pool was converted into a sports hall and an extension was built running at an angle of 45 degrees from the North East of the building to Maryhill Road to house a 25m pool, baby pool, steam room and changing facilities. The entrance was moved from the West elevation to a new reception area between the Baths and the Burgh Halls in Gairbraid Avenue.

Although it has not yet been verified by documentary evidence, it is possible that Maryhill Baths were designed by William Sharp (1860-1928) as the building shares many features with Whitevale Baths (see separate listing) which was designed by Sharp, for example, in the pilasters dividing the bays and the Ionic colonettes. We know from the Dean of Guild plans that Sharp was responsible for a new tank house which was added to the baths in 1904.

Swimming clubs and bath houses were established in Scotland from the 1850s following the enactment of the 1846 Act to Encourage the Establishment of Public Baths and Wash-houses, which was established to improve general public health with access for all classes of citizen. With the rapid expansion of urban population, often living and working in unsanitary conditions, bath and wash houses were seen as essential public services. The Act, which affected the entirety of Britain, encouraged local authorities to open up these facilities in areas of dense population. While men and women did not mix at these facilities, women would have had their own separate entrance, however they would have to attend at certain times when the male pools were not in use. It would not be until the 1870s when separate ladies pools were being considered in bath and wash house design. These bath and wash houses increasingly to catered for recreational swimming and became a hugely popular social pasttime during the 20th century.

Category changed from B to C and list description updated as part of the sporting buildings thematic study (2012-13).