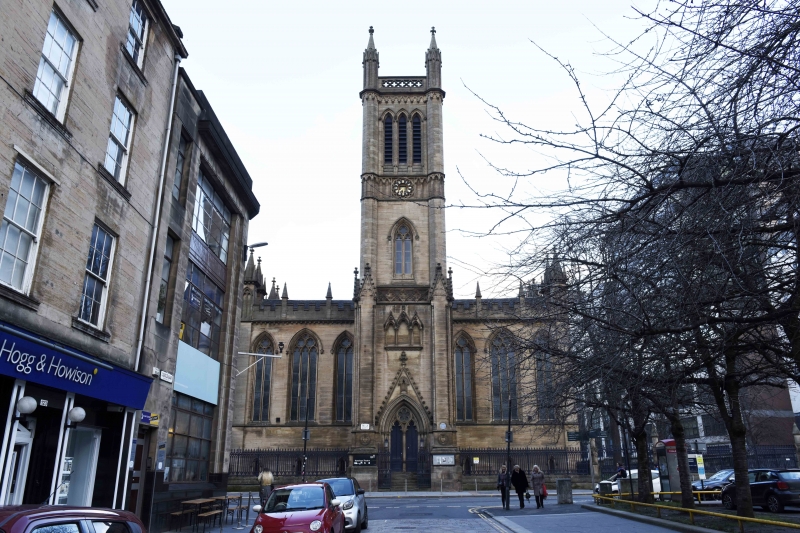 Place of worship no longer in use as such. The Ramshorn Theatre is an important early example of Scottish Gothic revival architecture. Its fine stonework detailing, including traceried lancet window and sculpted bands along with landmark tower make it a notable part of the streetscape which terminates a vista. This former church contains a good collection of stained glass depicting various stories from the Old and New Testament, many of which are by W and J J Kier of Glasgow. The later alteration to form part of the University of Strathclyde has retained the majority of the architectural detailing of the original church, particularly to the exterior.

Thomas Rickman was a self-taught architect who was renowned for Gothic detailing. In 1812 he designed a number of churches with John Cragg, a wealthy ironmaster with an interest in building. Their work includes St George's, Everton and St Michael's Toxteth, both in Liverpool. In 1817 he established his own architectural practice and in an effort to gain work entered a large number of competitions. He designed a number of domestic and public buildings all over England, such as Exhibition Room for the Birmingham Society of Artists (1829) and the New Court at St John's College, Cambridge (1827-31). He is best known for his church architecture and St David's Church is his only known work in Scotland.

Buildings of Scotland notes that Thomas Rickman provided 'Working Drawings with some alterations' on the basis of plans drawn up by James Cleland after a meeting with Rickman on the site.

List description and statutory address updated as part of the Theatres Thematic Study 2010 and the University of Strathclyde Review 2010-12.