A Category A Listed Building in Calton, Glasgow 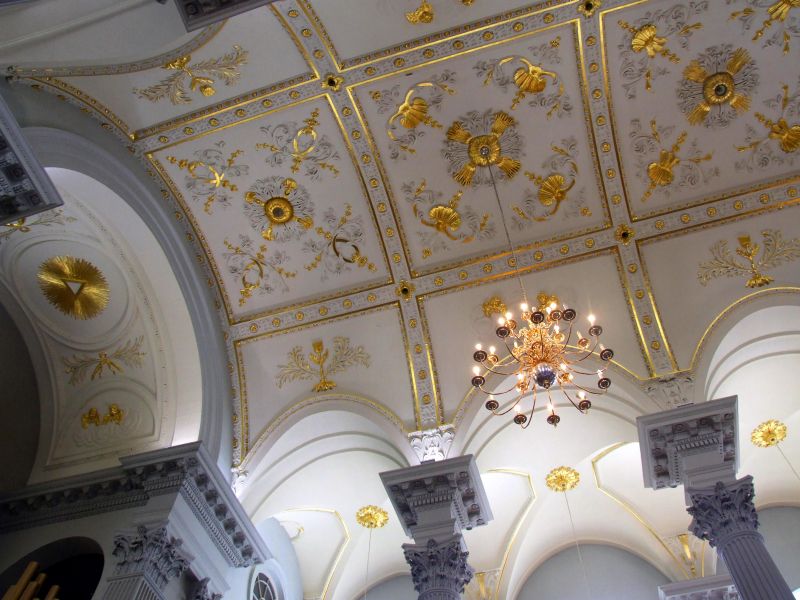 Alan Dreghorn, architect, 1739-1756. The design for this important and striking church is based largely upon James Gibb's London masterpiece of St Martin-in-the-Fields (1722), and it heralds a new style for large scale classical church design in Scotland. The interior has London precedents in the plasterwork of James Clayton and the richness of its' fittings are of exceptional quality.

have niches. Otherwise sash and case windows with small-pane glazing. Dentilled pediment with cartouche in tympanum.

Flanks 7-bay regularly detailed as above.

INTERIOR: exceptionally lavish 18th century interior, largely unaltered in its finest features of plasterwork and woodwork, however, alterations to the interior were carried out in 1874 by John Carrick, and in 1921 by Peter MacGregor Chalmers. 5-bay interior galleried to 3 sides with giant fluted Corinthian Columns supporting galleries as they rise to support barrel vaulted roof. To W gallery supported by smaller fluted Ionic columns, all with gilded capitals, to E shallow chancel (formerly site of organ). The plasterwork, by Thomas Clayton, and the

timberwork are of the highest quality as is the stained glass, mainly by Stephen Adam. The pews are laid out with aisles below the galleries, they are of pine and date from 1874 designed by John Carrick. The gallery fronts are original, carved mahogony in swagged and diapered panels. The fine mahogony octagonal pulpit rises from an

elaborately carved baluster shaft also supported by a Corinthian pillar which terminates in a gilded crown.

The rococco plasterwork of the vaulted ceiling is the work of Thomas Clayton begun 1753, as presumably is the elaborate gilded plaster surround to the clock in the W wall. The stained glass replaced original clear glazed sash and case windows, it all dates from circa 1874 and is signed by Stephen Adam. The Robert Anderson memorial window to the N gallery is particularly good and Pre- Raphaelite in design.

In the chancel are now housed 9 fine mid 18th-century chairs, originally sited in the W gallery as seating for the Provost and magistrates. Flanking the chancel the Willis organ (1874) is now housed in the upper N chamber. Organ pies to rear of chancel. The walls throughout are stencilled and gilded, repainted in 1920's but to a much earlier design.

St Andrew's became the centrepiece to a symmetrical square of 3-storey terraced houses laid out in 1760's, (now mostly demolished or sadly altered) and set the pattern for later building layout in Glasgow. It is possibly the most important and impressive 18th-century church in Scotland.

The architect, Allan Dreghorn (19-6-1764) was a wealthy timber and lead merchant and a prominent number of Glasgow's ruling elite, he held several municipal posts (Treasurer and Bailiff). His skill as an architect is amply attested by St Andrew's Parish Church, his main surviving work. It is presumed that his own workshops provided the carved timberwork for the church.