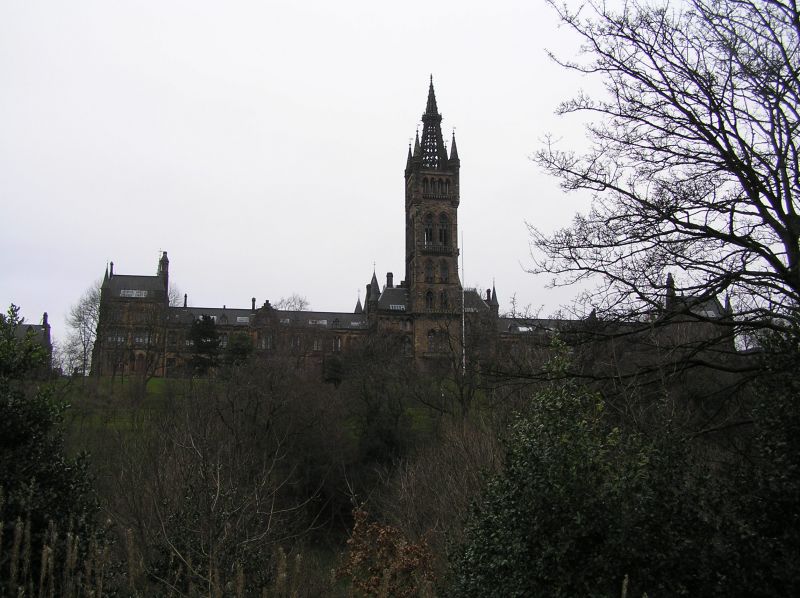 Of interest as an outstanding example of later 19th century Gothic Revival architecture by a leading British architect, Sir George Gilbert Scott. A number of the interior spaces are exceptional for their decorative schemes. The building also incorporates the fine Lion & Unicorn Staircase of 1690 from the Old College in the High Street and work of the highest quality by other major architects, including John Oldrid Scott and Sir John James Burnet.

By the 1840s the University's remarkable 17th century High Street buildings were much decayed and the surrounding area had become a disreputable part of town. The University made the controversial decision to sell the High Street site to pay for new buildings in a more fashionable location. The first scheme to build a magnificent college in Woodlands failed when the Glasgow, Airdrie & Monklands Railway Company were unable to complete the purchase of the High Street site.

A subsidiary of the North British Railway Company offered £100,000 for the High Street site in 1863. This time the transaction proceeded and the Gilmorehill lands were purchased for £65,000, along with the adjoining Donaldshill site for the new Western Infirmary. Controversially the commission for the new Gilmorehill building was offered to George Gilbert Scott without competition in October 1864. The first turf was cut on 6 June 1866 and the (incomplete) building was occupied for the academic session in November 1870. Throughout the building process there were frequent alterations to the plans and disputes over costs. The old Gilmorehill House served as a site office during construction before demolition in 1870. With the exception of the spire, the original U-plan scheme was completed in 1872. Three sides of a residential square were constructed at the open W end of the quadrangle (see separate list description for '1-13 The Square').

Major benefactions by Charles Randolph and the third Marquess of Bute enabled Scott to work up designs for the projected second phase of halls dividing the large central quadrangle into two. Scott's design was implemented posthumously from 1878 by his second son, John Oldrid Scott, and his Clerk of Works, Edwin Morgan. Following completion of the Bute and Randolph Halls in 1884, the last phase of the original plan was the addition of the spire in 1891 to a modified 'open' design by John Oldrid Scott.

John James Burnet was first appointed to complete the western range of the Gilbert Scott Building in 1913, but it was 1923 before work began on construction of the War Memorial Chapel and West Range. Modelling for stone carving was undertaken by Walter Gilbert and modelling for wood carving and internal -fittings by Archibald Dawson. The Chapel was dedicated on 4 October 1929. The West Range was originally occupied by the Faculty of Arts.

The Lion & Unicorn Staircase was designed in 1690 by William Riddell for the old college buildings in the High Street. The staircase was salvaged from the High Street site and re-erected at Gilmorehill in 1870. It was moved to its current location and re-configured (with a left turn, rather than the original right turn) in 1929 on construction of the Memorial Chapel and West Range.

The rich decorative schemes of the Randolph and Bute Halls were restored in 1985.