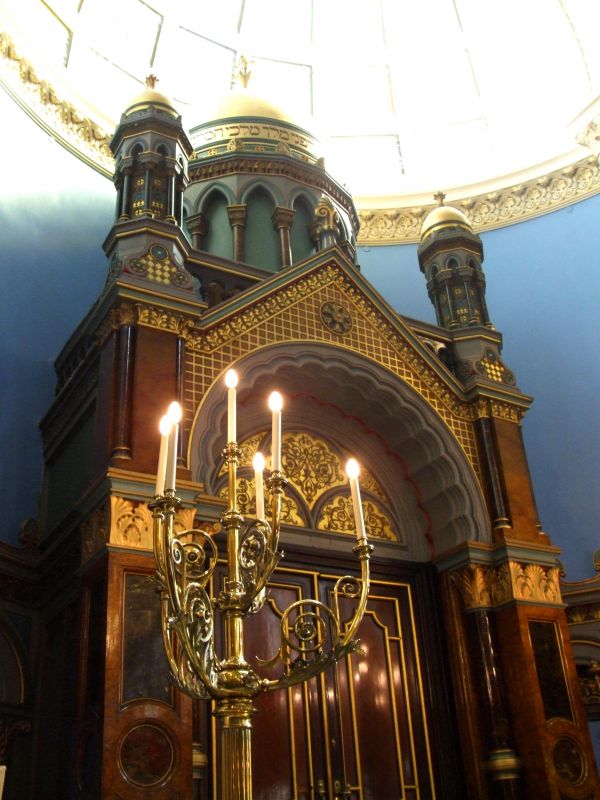 The Jewish community in Glasgow was established in the 1820s, and slowly grew to be the biggest Jewish community in Scotland by the turn of the century. During the early days of the community, Sabbaths and Holidays were celebrated in a small rented room in the High Street. A formal congregation was established not long after 1829, and found a home for their synagogue in the Old Post Office Court, Trongate. Following further moves to a room in Anderson's College (abandoned because of its proximity to the dissection room) and a top floor flat in Howard Street, in 1852 a building on the corner of George Street and John Street was purchased for £1700. Following £800 worth of alterations, the new synagogue was consecrated in 1857. However, only 18 years later, this synagogue was becoming crowded, and the decision was taken to build a new synagogue with school attached.

In November 1875, the site on the corner of Hill Street and Garnet Street (then known as Thistle Street) was selected and bought for £3,500. The site was cleared and on 17 March 1877 the plans were approved. The architect was John McLeod, who consulted N.S.Joseph, a Jewish architect based in London and well known for his synagogue designs including the Bayswater Synagogue. The foundation stone was laid in March 1877 and the completed building was consecrated by Rabbi Dr Hermann Adler on the 9th of September 1879. The total cost of ground and buildings came to almost £14,000.

The basement accommodation initially comprised schoolrooms, keeper's house, lavatories and bathrooms etc. Above, in the main hall, the original seating provides for 362 men and 218 women in the Ladies' gallery. A vestry (now the home of the Scottish Jewish Archives) was situated above the entrance hall. The marble pulpit was installed in 1896. The glazed cupola above the apse contains stained glass panes on which are written the first two Hebrew words of each of the Ten Commandments. The segmental stained glass window above the choir gallery was brought from the congregation's former synagogue on George Street. The carved Hebrew inscription above the main Hill Street doorway is Deuteronomy Ch. 32, V.12, and the numerical value of the Hebrew letters in this verse add up to the date of the foundation of the building.

Repairs and restoration to Garnethill Synagogue took place in 1998, partly funded by a grant from Historic Scotland.

Garenthill Synagogue was upgraded from B to A in 2004.