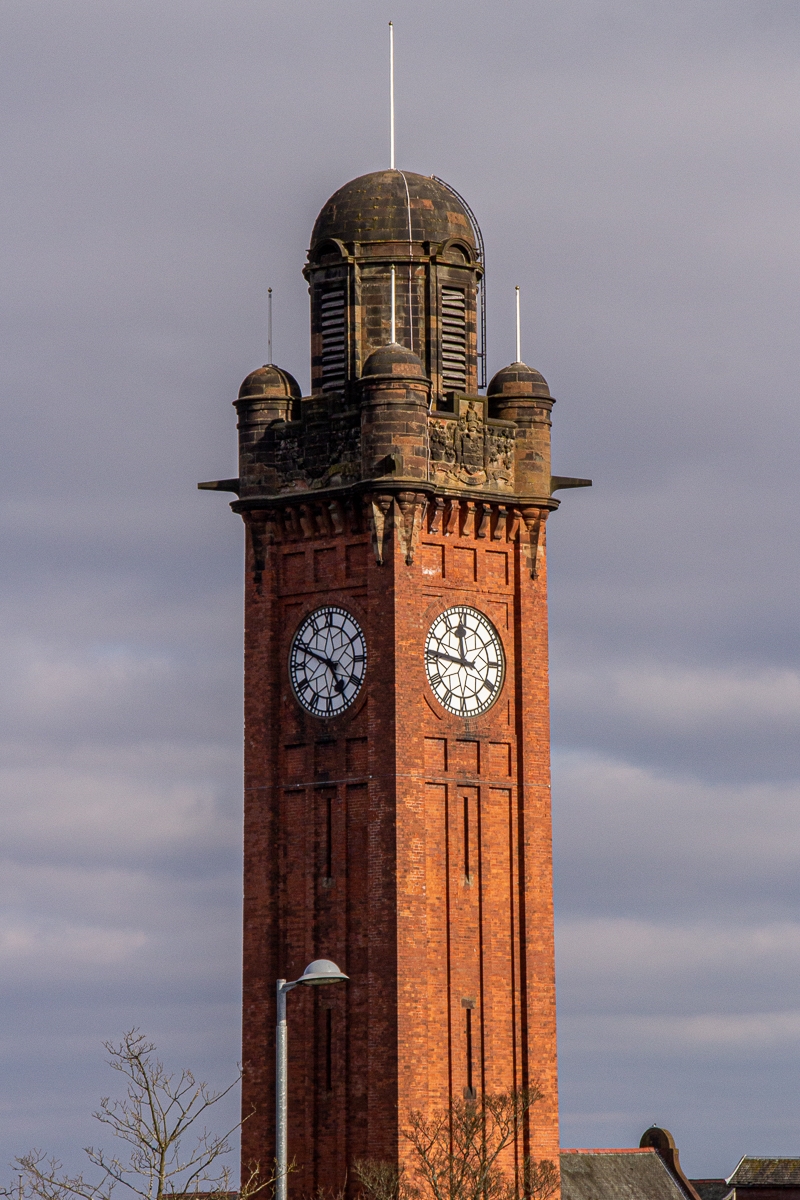 The interior was partially seen in 2013. There are cast iron columns to the ground floor of the water tower and some part-glazed internal doors.

The water tower block at Stobhill hospital was built 1900'04 by the Glasgow architects firm of Thomson and Sandilands and is one of the largest and most elaborate buildings of its type in any hospital site in Scotland. Water towers with clock faces are found in other large hospital complexes, but this one is exceptional for its height, decorative features and its prominence on the site. The tower and its surrounding buildings survive remarkably intact and the lower buildings have Dutch gables, with unusual columned decorative features at the gable heads. Despite the loss of some of the original buildings, the wider Stobhill Hospital site remains important as an example of one of the last large institutional complexes in the country to be built for the care of the poor.

Water towers were often necessary in large hospital complexes where the requirement for water to meet the demands of the large number of patients was greater than local supply could meet. As here, they often also had clock faces. As well as its excessive height, the water tower at Stobhill is exceptional for its clasping pilasters to the corners, vertical strip decoration and bartizans at the upper stage. The interiors have also been retained, mostly with little alteration. The lack of any significant additions to the building is unusual for a hospital building which remained in use until the end of the 20th century.

Stobhill Hospital was built as a Poor Law hospital and is one of only a handful of remaining large complexes built specifically to care for the poor. As such, it gives some insight into the provision of care given to people who could not afford medical care and who often had associated psychiatric problems. It accommodated young children, older married couples and the poor with medical or psychiatric disorders. Two other, smaller poorhouses were built in Glasgow at the same time, but these no longer survive. When built, the site was composed of a number of wards and associated buildings, some of which have either been demolished or altered so significantly that their integrity has been lost. The water tower block is remarkable in that there has been little alteration to the external appearance of the building and the interior still retains some original feature in the cast iron columns and part-glazed timber doors. The 3rd Edition Ordnance Survey Map of 1922'3 shows the water tower building at the centre of the complex, together with other utility buildings. It retains this central position.

The hospital was requisitioned by the military during the First World War, when the patients were sent to other hospitals. After 1948, it became part of the NHS. New buildings were built on the site in the latter part of the 20th century and the site continues as a hospital.

Provision to care for the poor in Scotland has varied over the centuries and in the 18th and early 19th century it largely fell to churches to provide some sort of care in their parishes. This care could vary tremendously from parish to parish and was often in monetary form and did not involve providing accommodation. After the Poor Law (Scotland) Act in 1845 was passed, a Supervisory Board was set up in Edinburgh which oversaw relief throughout the country. A model plan was drawn up for poorhouses and many smaller ones were built between the period of 1849 and 1870 following this plan. In the larger towns and cities, more provision was required and bigger complexes were built. These were often overcrowded and by the end of the 19th century, there was increasing concern that medical care for the poor should be provided in one institution and there should be separate wards to accommodate this. Of the large institutions built during the latter part of the 19th and early 20th century only five survive in 2014.

The architectural practice of John Thomson and Robert Douglas Sandilands ran from 1886'1914. Based in Glasgow, it was very a successful practice, which gained most of its work from competition designs, although it also had some private clients. Its works include the Beaux Arts style Govan Town Hall, Gartloch Asylum, which has a similarly tall water tower and the former offices and shops of the Glasgow City Improvement Trust at the Trongate in Glasgow.