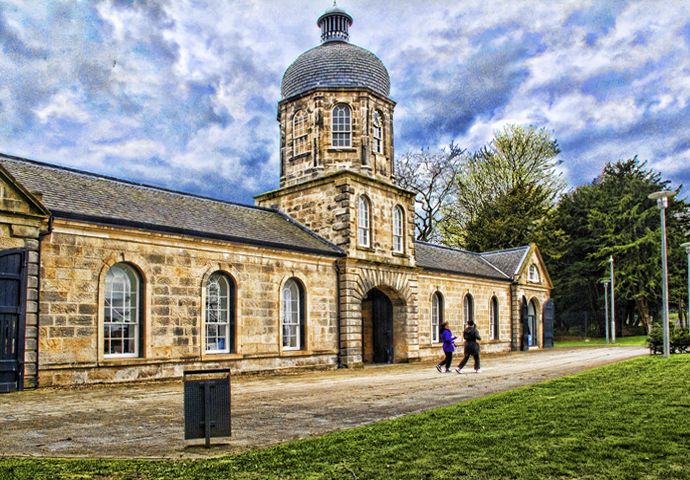 The former Castlemilk Stables is a good example of a Classical style stable block and it is one of the few remaining structures relating to the Castlemilk Estate. It is an important architectural survival in this part of Glasgow. The attribution to David Hamilton, one of the leading architects of the time, is based on a perspective watercolour drawing of the stable block signed by him which was shown to the Glasgow Building Preservation Trust during the conversion works (see their website for further information). The building depicted is understood to be somewhat different from what was constructed. Adding further weight to the stable block attribution is the knowledge that Hamilton is also attributed to later 1830s remodelling and extension work at the now-demolished Castlemilk House.

David Hamilton (1768-1843) was an important Glasgow-based architect who worked mostly in the West of Scotland and who made a significant contribution to Scotland's early 19th century architectural character.

Located a short distance to the South of Castlemilk House, the stable block would have been intended to be seen and to impress visitors with its grandeur. It was a visible symbol of the wealth and taste of the owner. Constructed in the then-fashionable Classical style, its quadrangular plan-form and symmetrical principal elevation are characteristic of the rationality associated with this period.

Glasgow Corporation bought the Castlemilk Estate in 1938 as part of their plans to create additional housing on the outskirts of the city. Building work began in 1954 and Castlemilk Stables is one of the few historic buildings to survive. Castlemilk House dated from the late medieval period and was extended to a castellated mansion in the 18th and 19th centuries. It was demolished in 1972. The enormous 19th century oak chimneypiece depicting the 1429 Siege of Orleans which was formerly located in the main hall of Castlemilk House was saved during the demolition of the house and was relocated to the foyer of the stable block as part of the 2005-07 conversion.

The 2005-07 conversion by Elder & Cannon architects has won a number of architectural awards including joint winner of the 2008 RIAS Andrew Doolan Best Building in Scotland Award. The building has now passed into the care of the Cassiltoun Trust and functions as a multi-purpose community facility.