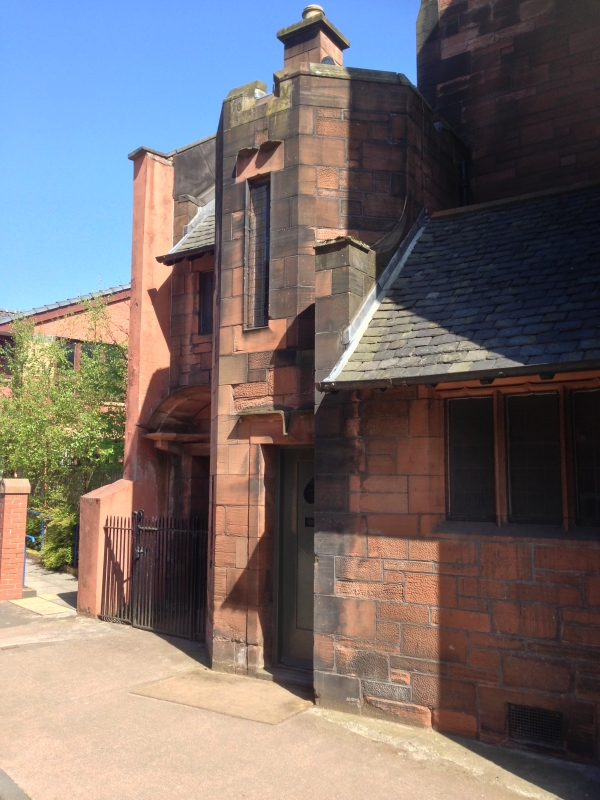 A former Free Church designed for the Free St Matthew's Congregation in 1896-99 by Charles Rennie Mackintosh (while an assistant with John Honeyman and Keppie). The building is constructed of red sandstone ashlar with a tapering 'medieval' tower, gothic gables and bespoke Art Nouveau details that pre-figure Mackintosh's later decorative work.

The building has a rectangular plan, with transepts and porch. At the southwest angle is a tapering tower with stair turret, perpendicular window and louvred window in the upper stage, derived from the medieval tower of Merriott Church, Somerset. The prominent south elevation has two full-height gabled bays with large perpendicular gallery windows, adjoining tower, two low aisle bays spanned by a bold flying buttress. At the east a two-storey porch with highly distinctive Art Nouveau details. The west gable has a large perpendicular window.

A passage aisle to the south links the two main entrances. There are galleries to the east and in the southwest projection, boldly cantilevered with pendant details.

Some of the furnishings to the interior were designed by Mackintosh. In 1944 the rear five rows of pews were removed and the timber used to construct a decorative screen under the east gallery, designed by Thomas Howarth. The west window has three coloured lights designed by Gordon Webster in 1960. The beam spanning the chancel arch, which is not strictly speaking a rood beam as it does not support a cross) is a reconstruction installed in 1990, based on photographs of the original which was removed in the 1950s.

The adjoining hall is reached by a link from the east end. The hall is rectangular-plan with a typical Mackintosh open-trussed roof and top lighting. Tall dado panelling with deep cornice.

Queen's Cross Church is Charles Rennie Mackintosh's major ecclesiastical work. While the overriding style is gothic, the general form of the building and its decorative details recall medieval architectural forms. This suburban church is an exceptionally important landmark building featuring a wide variety of elements, lending the building a dynamic sense of movement across the principal elelvation. The disparate parts are pulled together by the square tower at the corner of Springbank Street. No longer in ecclesiastical use, it has been the home of the Charles Rennie Mackintosh Society since 1977. In 1994 money was gifted to the Society by Thomas Howarth to enable it to buy the church.

While the 1896 church committee minutes name John Keppie as the architect, it has never been doubted that Mackintosh was responsible for the design. His authorship could not be acknowledged publicly at that time because he was still only an assistant in the practice. He drew the elaborate perspective which was exhibited at the Glasgow Institute of the Fine Arts in 1898. Mackintosh's drawing is closer to the finished building, but there are some significant differences, indicating that the design continued to evolve during construction. The church was also included in a list of his works, published towards the end of his life. (Mackintosh Architecture)

Queen's Cross church belongs to a wider development in Presbyterian church design, which from the 1880s onwards moved away from galleried auditoria intended simply for preaching and towards a more spiritually resonant architecture of worship. The interior ceiling is modelled on The Holy Trinity Church (1886) in Hammersmith, London by Richard Norman Shaw.