A Category B Listed Building in Haddington, East Lothian 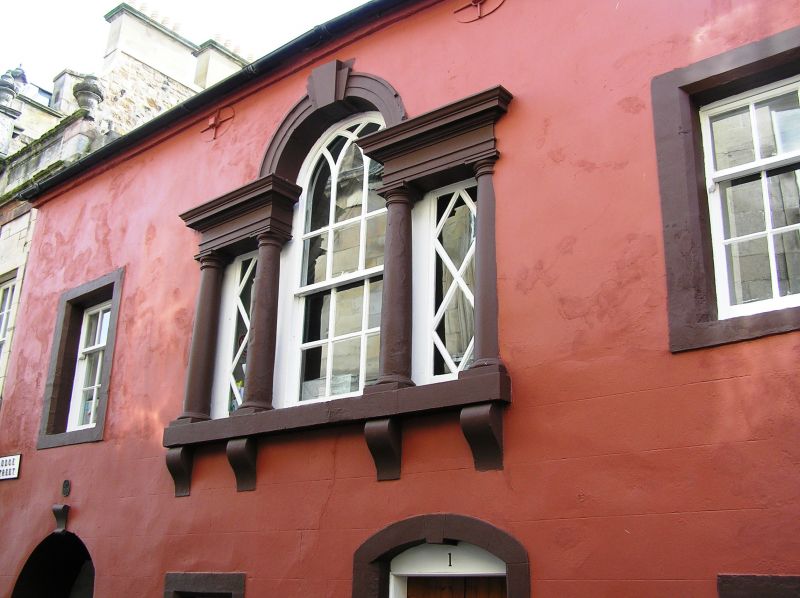 Possibly dating to the early 18th century with later 18th century additions and alterations and early 21st century interior alterations. 1 and 2 Lodge Street is a two-storey, three-bay, L-plan former townhouse at the centre of the burgh of Haddington. The building was adapted and used as a Freemasons' hall from around the late 18th to the late 19th centuries. The north (street) elevation has an archway to a pend (Roughead Close) leading to 2A Lodge Street (see separate listing, LB34247) to the left and an off-centre doorway flanked by two small windows to the right. In the left reveal of the archway is an engaged and painted stone column with a base and moulded capital. The street elevation has painted render over rubble and the rear elevation is rubble. The first floor has a central Venetian window with a corbelled cill and deep pediments over four colonnettes. This window is flanked by two separate single windows.

The window and door openings have raised and painted dressed stone margins. There is a smooth rendered base course and two iron pattress plates (building ties) over the central window. The roofs are slated and there are stone skews. On the west end of the roof ridge is a pair of plain chimney cans with no chimney stack. There is a brick chimney stack on the rear section.

The interior of the building was seen in 2017. The ground floor was altered around 2006 including partitions to create office and storage spaces. There is some earlier timber boarding on the front wall of the ground floor. There is an earlier 19th century curved stone stair at the rear which has a later 20th century timber handrail to the first floor landing area. There is a small room with a plain fire surround and a flat press at the rear part of the first floor.

The majority of the first floor has a large former masonic meeting hall to the street side. This room has a flat ceiling above a deep dentilled cornice and curved combed detail. At the centre of the ceiling there is a small dome and this is flanked by two octagonal metal ventilator caps. There is a stone fire surround with a cast iron insert framed by a large timber surround with a shaped pediment on the south wall of the room. There is a round arched niche in the east wall and a large recessed timber bookcase in the west wall. There are two metal tie rods across the room. A six panel entrance door has a small trap door at eye level which was used to present rings to allow entry.

1 and 2 Lodge Street is a notable example of 18th century burgh architecture with classical detailing to its principal elevation suggesting its status as one of the formal meeting places in the town. It is an early building in the burgh and its elevations appear to be largely unchanged since the later 18th century. Its association with the Lodge of St John Kilwinning, one of the earliest established Masonic Lodges in Britain, is well documented and the Freemasons' hall on the first floor is still in place. This building forms part of the urban fabric of the centre of this historic burgh and is part of a group of buildings that is a focal point in the townscape.

The building first appears on Armstrong's map of 1773 in a simple rectangular form. Maintenance works in 2013 identified surviving earlier fabric on the street elevation of the building including an arcaded ground floor which may indicate an early 18th century date (AOC Archaeology report, 2013). Wood's map of 1819 shows by that time the building had linear extensions to the rear. The more detailed 1st Edition Ordnance Survey Town Plan (surveyed 1853, published 1855) shows the building marked as the 'Freemasons Lodge (St John Kilwinning)'. This map shows the curved rear access stair and also indicates the central window opening in the north elevation.

Haddington was the principal burgh of the former Haddingtonshire and remains the largest town in East Lothian. Haddington was established as a royal burgh in the 12th century and as the main market town and place of commerce for the county, it expanded greatly in the later 18th century. The town therefore has a long history of trades associations and associated guildhalls such as the Old Fellows Hall, Forester's Hall and Gardener's Hall, all around the Kilpair Street end of the High Street.

Haddington has a long association with the Freemasons. The Provincial Grand Lodge of East Lothian and Berwickshire's website notes that the St Johns Lodge Kilwinning No. 57 is one of the oldest lodges in the world which can trace its history back to 1599. They note the earliest records of its regional Lodges in East Lothian date to the 1747 when John Murray, Keeper of the minute book of the Court of Session, was appointed Provincial Grand Master over the Lodges of Dunse, Haddington, Peebles and Selkirk.

The building is eventually identified as Freemasons Lodge (St John's Kilwinning) on the 1st Edition Ordnance Survey Map and in the Ordnance Survey Name Book, both of 1853. In the name book the building is described as two storey, in good repair and 'used as a meeting house for the society of the ancient order of Free Masons'.

1 and 2 Lodge Street is still marked as the 'Masonic Lodge' on the 2nd Edition Ordnance Survey Town Plan (surveyed 1893) but is known to have moved to premises at 57 Hardgate (the former Forrester's Hall) at the other end of the High Street sometime after 1893.

Due to the secrecy surrounding Freemasonry, it was common for Lodges to take over and adapt existing buildings, some of which may have been offered for use by owners who were themselves lodge members. The resulting buildings often had eclectic architectural motifs. It is not possible to know how many early Freemasons' Halls there were but it likely that buildings used for this purpose were located in larger burghs across Scotland. Purpose-built masonic halls began appearing in the 19th century, one of the earliest is at Crieff, dating to 1816 (LB23500). 1 and 2 Lodge Street is an example of a building which was adapted for use as a Freemasons' Hall at an early date and this change is of some interest in listing terms. The building is also a good surviving example of a classical townhouse building and is among the earliest surviving buildings in Haddington.

Buildings erected before 1840 which are of notable quality and survive predominantly in their original form have a strong case for listing. 1 and 2 Lodge Street has early fabric and has undergone several different build stages and modifications primarily during the 18th century. Its current exterior appearance has not changed significantly from its late 18th century arrangement when it was still in use as a Freemasons' Hall marking it out as a building of some status within the burgh.

The interior of the building has been altered in the early 20th century however it retains decoration, fixtures and fittings from the time when it was used by the Masonic Lodge from around the late 18th to the late 19th centuries, which adds to the interest for listing.

The main room at the front of the first floor of the building is still a single space (the former masonic hall) and retains its coved ceiling, fireplace, and niches. There are also fittings remaining such as a high metal rail over the fireplace which may have supported a masonic wall hanging. There is a small peephole in the entrance door to the room which allowed members to be seen before they were allowed access into the hall.

It is known that remnants of an early painted decorative scheme were recorded around 2007 although they has since been covered over.

The rectangular plan form of 1 and 2 Lodge Street is typical for an 18th century townhouse. While it has had some alterations to the ground floor, the first floor masonic hall and the turnpike stair to the rear are still in place.

The enclosed curved stair set out with the footprint of the main building line is typical of 18th and early 19th century houses and commercial buildings in urban areas across Scotland. This tells us that the building was likely single storey when it was first built and was later added onto.

Armstrong's map of 1773 indicates that at that date the building had the same plan as the majority of the buildings in the street. By the 1853 Ordnance Survey map most buildings in the centre of the burgh had later development to the rear. These were typically rectangular plan ranges running the length of feu (plot of land). These additional buildings required associated pends to provide access to them.

The architects for the building and for the later alterations are unknown. The alterations to the front part of the building are thought to date to the late 18th century and it appears to be largely unchanged since that date.

The Buildings of Scotland specifically notes that Haddington Town Hall (LB34185), dating to 1748, was altered to the principal east gable in 1788 to include a Venetian window. These works are also thought to have replaced a segmentally arcaded basement. It is possible that the alterations at 1 and 2 Lodge Street building are of a similar date to the work at the Townhouse.

1 and 2 Lodge Street is among the earliest surviving buildings in Haddington. The building and its immediate neighbours form a narrow street at the head of the High Street. By the mid-19th century the street had been named Lodge Street, indicating the historical association of the former Freemasons' building to its location.

Lodge Street forms is part of the 18th century street pattern of this historic burgh. The street's characteristics have developed over time into buildings with public front facades facing the street at the head of a long linear plot which have lower buildings to the rear accessed by pends.

The building is part of a grouping which together create a focal point at the head of the High Street when looking east. It is adjacent to the classically styled mid-18th century Carlisle House (LB34239) and opposite the John Muir House (former City Bank, LB342241).

There are no known associations with a person or event of national importance at present (2017).