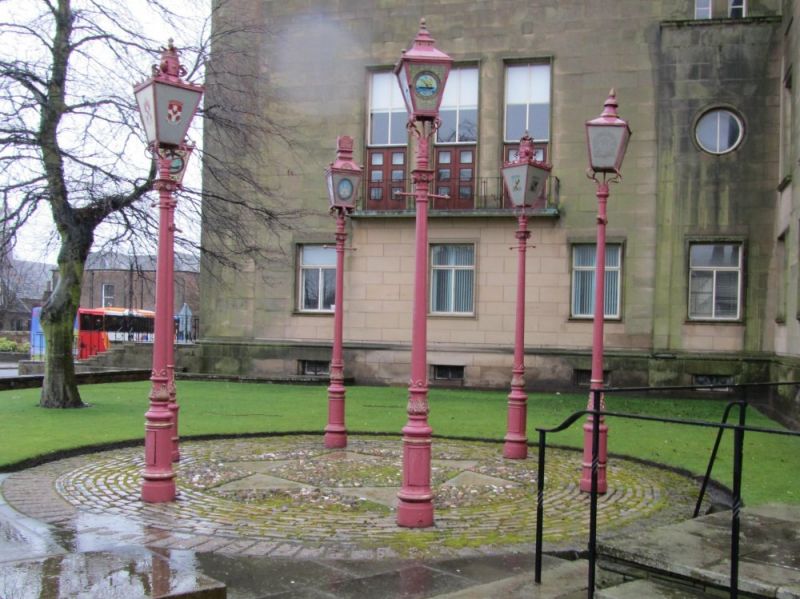 S ELEVATION: 16-bay (grouped 1-10-1-3-1). Advanced entrance bay to right of centre with double stair and decorative cast-iron lamps to pilastered and canopied doorcase with attenuated brackets, keystone and voussoirs, 2-leaf panelled timber door and small flanking windows with cast-iron guards; carved stone above with 'The Abbey' (see Notes); blank, set back face above with flanking plain pilasters. Return to right with 4 small basement windows, 4 windows to ground, that to right in advanced bay, and tall tripartite window above with French doors and decorative cast-iron balcony; glazed oculus to outer right in advanced bay, and small bipartite window above. Return to left mirrors that to right. 3 bays to right with regular fenestration and lower bay to outer right with 2 small windows, each with cast-iron guard; round carved panel above with tree over 'SIGIL DE DYSERT'. Bays to left of entrance bay with regular fenestration, and advanced bay to outer left with vehicle entrance at basement, regular fenestration above: return to right with steps, piers, dwarf wall, decorative cast-iron lamp and railings to 3 bays each with 2-leaf part-glazed timber door and plate glass fanlight; regular fenestration to each floor above.

W ELEVATION: 7-bay. Penultimate bay to left with steps, flanking dwarf walls and decorative cast-iron lamp brackets lead to canopied and pilastered doorway with 2-leaf panelled timber door and fanlight with cast-iron lamp; decorative panels above with star to left and crescent moon to right; circular voussoired stone above with 'The Abbey' and 'VIGILANDO MUNIO'; window to 2nd floor above. Regular fenestration, including basement, to all other bays.

E ELEVATION: lower advanced bay with 3 windows each to ground and 1st floor, the latter taller with common decorative cast-iron balcony. Recessed face above with 2 windows to right and 2 to left.

The Carr and Howard design was a competition winner, but building had only progressed as far as the basement and some structural steel when war broke out. After the war some internal alterations were made to the plans and building work restarted in 1950. The 1st phase was officially opened on 6th July, 1953 by the Rt Hon Earl of Home; and the 2nd phase on 7th November, 1956 by Provost David Wright, JP. Estimated at an original cost of ?122,000, the final cost amounted to ?322,000. The 'Sower' was designed by Thomas Whalen RSA and cast by George Mancini of Edinburgh: the weathervane of St Bryce was designed by the architect and made by Thomas Hadden of Edinburgh. The abbey symbol derives from the Coat of Arms of the Royal Burgh of Kirkcaldy, and the crescent from an alternative Coat of Arms of 1672. The Provost's lamps, from Buckhaven and Methil, Burntisland, Kinghorn, Kirkcaldy, Leven and Markinch, were relocated to this site in 1975 when the

7 Burgh Councils ceased to exist; Leslie did not have a lamp.