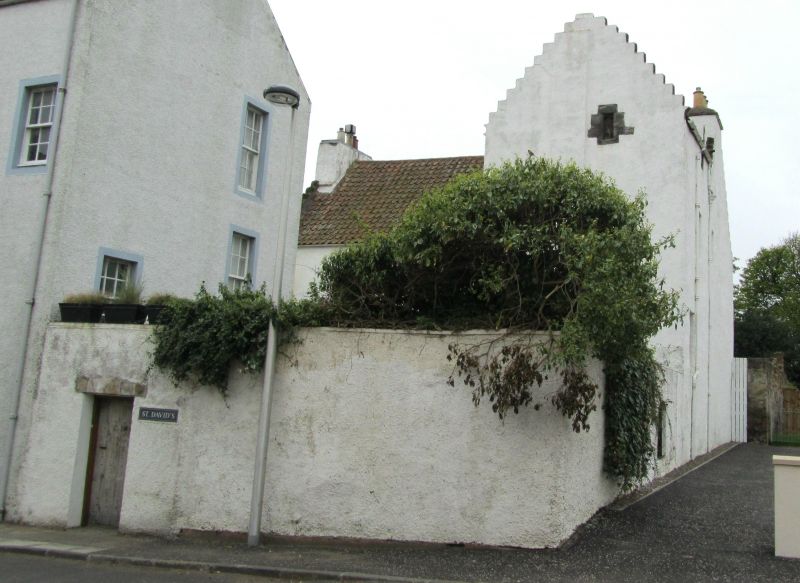 NE (ENTRANCE) ELEVATION: advanced stair tower to right with slit window to right in gablehead, segmental-headed roll-moulded doorway with splayed soffits and deep-set panelled timber door on return to left, corbelled drip-mould to left at upper floor and small window to centre breaking eaves into crowstepped dormerhead. Recessed face to left of centre with door to left and small adjacent window to right, window to 1st and attic floors to outer right, that to attic breaking eaves into swept dormer.

INTERIOR: interior details include a spacious scale-and-platt stair with 19th century balustrade and an enormous kitchen fireplace. Original beamed and boarded ceiling in the next room, and other original features thought to be hidden. 1st floor room to S retains flat late 17th century cornice, with other details of 18th and 19th century origin including shutters, chair-rails, cornice and chimneypiece. Attic floor retains a good late 17th century timber chimney surround and 2 panel doors in the south room, 2 similar panel doors and cupboards in the other two rooms.

The original interior plan of ground floor kitchen with chimney in the gable, and 1st floor hall over, closely resembles that of Bay House at Pan Ha' (listed separately). St David's was probably remodelled internally during the last quarter of the 17th century and again early in the 19th century when most window openings were enlarged. The corbel table (to SE) indicates a pentice-roofed wing, and the cap-house was latterly used as dovecote.