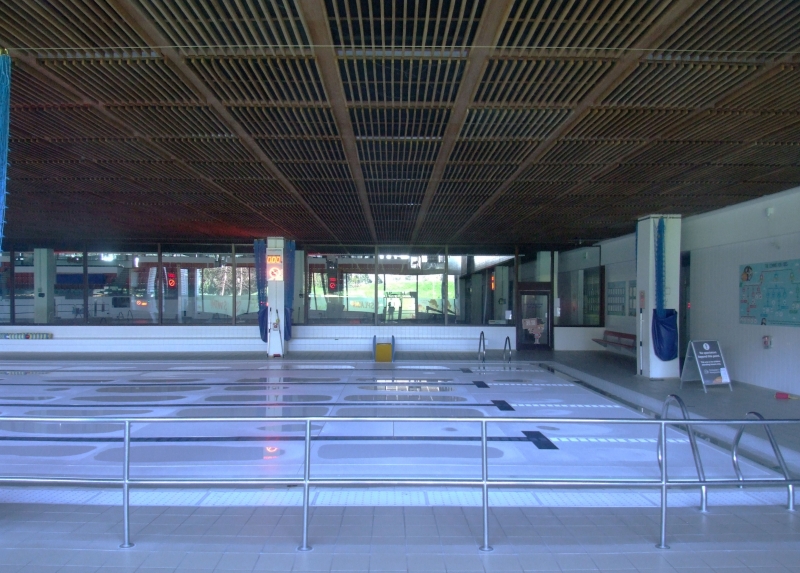 Original pool with raked floor replaced 2009-12 by level floor which can be raised or lowered; hexagonal diving pool replaced by square one with similar moveable floor.

This building, designed for the Commonwealth Games held in Edinburgh in 1970, is an outstanding example of a late 20th century building and it is one of the most successful designs of John Richards, partner from 1964 to circa 1990 in the internationally renowned and prolific practice Robert Matthew, Johnson-Marshall and Partners. By the mid-1960s the practice had undertaken important commissions for universities in Scotland, England and Ireland, as well as hospitals and power stations.

The site on one of Edinburgh's main arterial routes is a prominent one with a backdrop of Holyrood Park and Arthur's Seat while also being at a point where the Victorian tenements which surround Edinburgh's Old Town give way to the villas of the Grange. The building fits well into this context with its understated clean simple lines and restricted use of materials and succeeds in achieving an air of civic importance, befitting its periodic international role. The horizontality of the building is balanced by the verticality of the tall chimney and the height of the hill behind. The building has a very large footprint but this is offset by the way in which each level 'floats' over the one below with deep overhangs at each level, giving it a lightness which belies its size. The sloping site is also used effectively, the building being two stories on the Dalkeith Road elevation while the main bulk is hidden at the rear where the building is four stories. Careful landscaping was designed to blend with the grounds around Pollock Halls which served as the Commonwealth Village.

An outstanding feature is the planning of the building which addresses the key problems in swimming pool design: heat-loss from the main pool hall, external condensation, and glare from windows. The main pool hall is surrounded at various levels with circulation spaces and subsidiary rooms, acting thus as 'double glazing'. Architecturally and spatially, the diagonal, descending arrangement of the plan from the entrance hall at the top left to the diving pool at bottom right is boldly expressed, suddenly transforming from the 'human scale' and low ceilings of the entrance hall and changing rooms to the vast, airy space of the main pool area.

The selection by Edinburgh Corporation of this design was a bold one but continued a path of selective insertion of new designs within the existing context, which had started in the 1890s under the influence of Patrick Geddes and continued by various City Architects notably Ebenezer McCrae and his successors. It was a milestone in the development of the modern leisure centre, representing a shift in thinking away from the municipal baths of the late 19th century and early 20th century with their emphasis on hygiene and physical fitness to the modern ethos of community recreation and sport.

During the refurbishment of 2009-12 which included the complete removal of the old pools and reconstruction, care was taken to match many original features particularly original finishes while upgrading the building to meet contemporary standards. Apart from the moveable floors of the pools changes includes better disabled access, improved changing facilities and re-arrangement of the entrance hallway to improve the sight lines to the rear of the hall and the café area which was a feature of the original design, though subsequently altered. The complex technical requirements for heating, water filtration and ventilation have been completely renewed.

Swimming clubs and bath houses were established in Scotland from the 1850s following the enactment of the 1846 Act to Encourage the Establishment of Public Baths and Wash-houses, which was established to improve general public health with access for all classes of citizen. With the rapid expansion of urban population, often living and working in unsanitary conditions, bath and wash houses were seen as essential public services. The Act, which affected the entirety of Britain, encouraged local authorities to open up these facilities in areas of dense population. While men and women did not mix at these facilities, women would have had their own separate entrance; however they would have to attend at certain times when the male pools were not in use. It would not be until the 1870s when separate ladies pools were being considered in bath and wash house design. These bath and wash houses soon started to cater for recreational swimming rather than washing and became a hugely popular social past time during the 20th century.