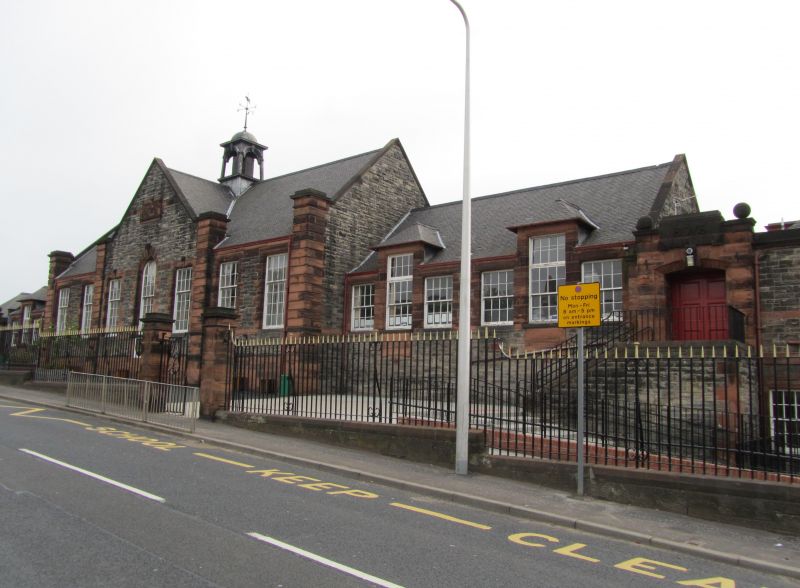 W (NORMAND ROAD) ELEVATION: symmetrical. 5 taller, advanced bays to centre with round-headed window over deep sandstone apron and flanking windows below moulded date stone in gablehead and flanking pilasters, 2 windows to each side and further flanking pilasters. 2 bays to right each having tripartite window with raised centre breaking eaves into swept and piended dormerhead, and blind sandstone apron; bays to left mirror this. Penultimate bay to right with steps up to doorcase marked 'BOYS', with 2-leaf panelled timber door; similar bay to left marked 'GIRLS' but without steps. 2 windows to outer bays.

INTERIOR: central corridor with circular rooflights and flanking classrooms all with dado rails or boarded dadoes. 7-bay gym-hall with shallow barrel, ribbed roof. Cellar with round- and segmental-arched openings.

Dysart Burgh School was formed in 1881 with the amalgamation of the North and South Schools. This building was opened in September 1916 as Blair Hill School. Owing to the steep gradient on which the school is built, the only 1st floor room is situated to the N, with 2 basement rooms to the S. There is a long service tunnel below the building with round-headed brick openings, but not vaulting.