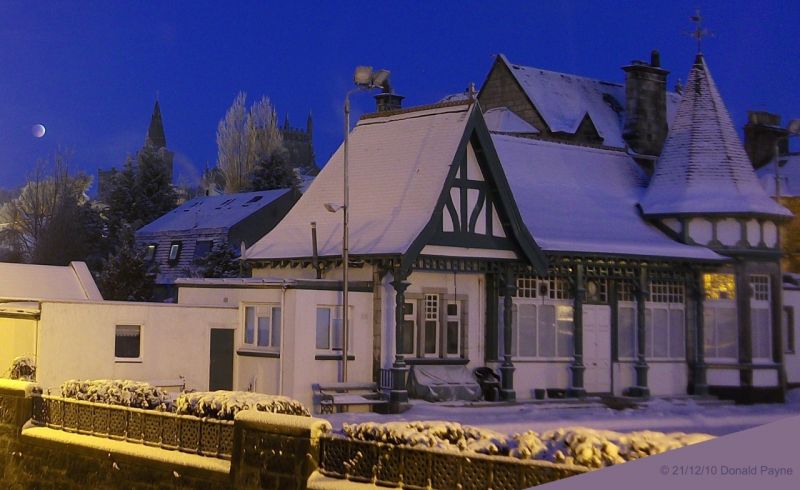 The Dunfermline Bowling Club is a well-detailed example of a late 19th century bowling clubhouse designed with Arts and Crafts influences. Its half-timbered gables, swept roofs and decorative use of timber detailing all add to its distinctive character.

The club was established in 1852 by a group of 12 local artisans and tradesmen. Making use of an area of garden ground at the top of Woodhead street, the game became popular so quickly that members of the public who used the green were ordered to pay for green maintenance as a penalty. The club moved to a new and larger green at Priory Lane in 1861. A 'rustic' clubhouse was built the following year. This building was replaced by the present club pavilion in 1895 at a cost of 354 pounds.

The history of lawn bowls in Scotland is long and distinguished and it remains a hugely popular sport. The earliest reference to the game in Scotland appearing in 1469 when James IV played a variation referred to as 'lang bowlis' at St Andrews in Fife, and James VI played bowls when he resided in the Royal Palce of Dunfermline in 1596. The first public bowling green in Scotland was laid out in 1669 at Haddington near Edinburgh. However, it was not until 1864 that William Mitchell of Glasgow committed the rules of the modern game to writing in his Manual of Bowl-Playing. Machine manufactured standard bowls were invented by Thomas Taylor Ltd, also of Glasgow, in 1871 and the Scottish Bowling Association was formed in 1892. The advent of indoor bowling also began in Scotland around 1879. There are currently (2013) around 900 clubs with an estimated 90,000 players.

Sport is a hugely important part of Scotland's shared social and cultural history and it is fitting that the country's sport-related architectural heritage is so rich and varied.