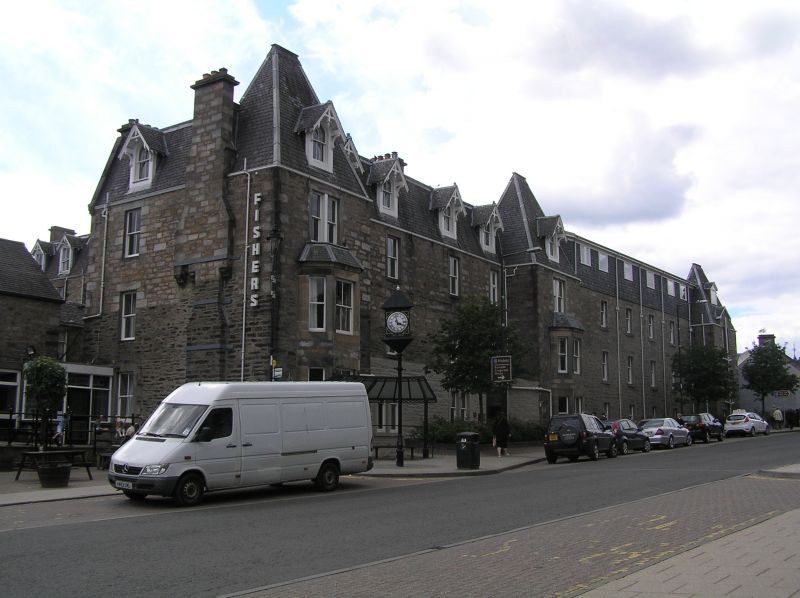 SE ELEVATION: full-height corbelled shouldered stack piercing eaves to right of centre, window to each floor in bay to left, and dormer window above. Former stable block projecting at left, and variety of elements in bays extending to outer left (beyond stable projection) including timber and stone-pedimented dormer windows, and engaged crenellated tower.

NW (GARDEN) ELEVATION: irregular elevation with bays to left obscured by extension; 2 unaltered bays to right, that to left with canted 4-light window to each floor giving way to finialled polygonal roof, that to right with bipartite window to ground and stone-pedimented dormer window above.

SW ELEVATION: gabled elevation with French window in bay to leftt at ground, window to right and regular fenestration to 1st floor.

The oldest known photograph of Fisher's Hotel shows the original 1840s appearance with dominant 2-storey outer gables flanking recessed bays with dormerheaded windows. According to the NSA "It had often been the subject of complaint that such a village should have been so long without a suitable inn. The want is now remedied. Mr Butter of Faskally has built a good commodious house." Mr Donald Fisher, took the building over after 1854, subsequently laying out begonia beds in the style of those at Kew Gardens. Extensive alterations later took place, possibly in 1883 when new gatepiers were erected. The 1897 extension (mansard added 1987) extending the principal facade was reputedly a retaliatory move by Mr Fisher for the building of Alba Place opposite, he is recorded as saying "If you won't let me see Ben-y-Vrackie, then I won't let you see my gardens". Mr Fisher died in 1908, and in 1910 the hotel was offered for sale as part of 'The Perthshire Estates of Archibald Edward Butter of Faskally', it was at that time "standing in beautifully laid-out Gardens .... Let on lease to a Limited Company and .... under excellent management". The accommodation included a "Large Dining Room 61' x 33', with an excellent Floor for Dancing, and 85 comfortable Sitting and Bed Rooms". The annual rent, together with a stretch of salmon fishing on the Tummel, was ?1,012. The hotel was taken over as officer's rest facilities during both World Wars, owned by Major Butter's Consortium by the 1960s, and subsequently sold to British Trust Hotels in 1987 at which time 51 bedrooms were added.