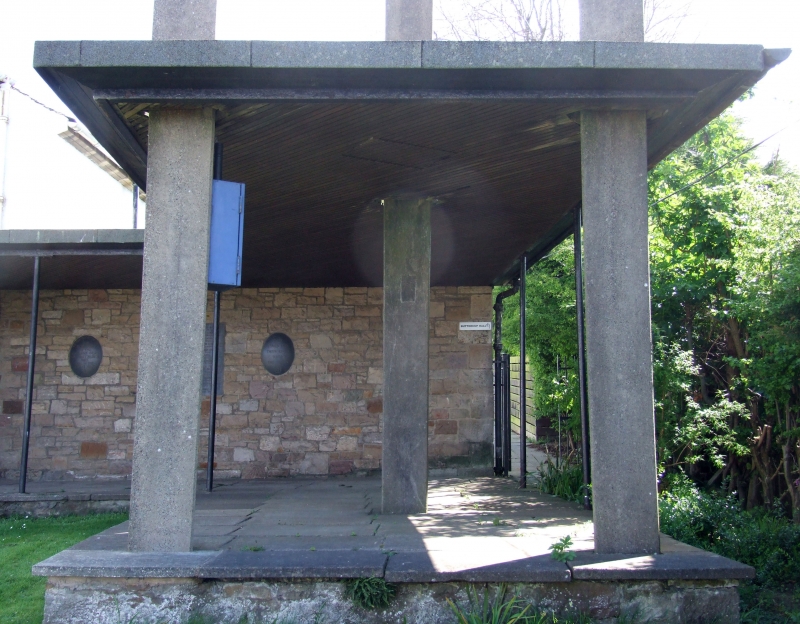 Basil Spence & Partners, 1954-8 with later addition adjoined to north. Aisle-less nave and gabled church with ancillary wing to north and tripod belltower to south. All set around courtyard and built into slope of hill with rubble retaining, boundary walls and steps to west. Rendered, cavity brick walls with gables predominantly of squared, recycled rubble. Pitched roof with Ballachulish slate.

The interior was seen in 2000 and is an irregular-polygonal plan church with timber lined ceiling and plastered walls. At the east end is a raised triangular platform with timber liturgical furniture, a triangular communion table to match the platform and a large timber cross mounted on the rubble wall. Natural light shines through 22 windows on both side walls and lights are suspended from the ceiling by wires. Organ loft at rear.

St Andrew's Church is a unique example of a church in Scotland by the internationally renowned architect, Sir Basil Spence. The church is a good example of a post-war church building that has been influenced by rural vernacular architecture, as evidenced by the use of traditional materials, such as stone, slate and harl, and its modern interpretation of traditional motifs. In particular, the triangle, which represents the Holy Trinity, subtlety pervades the design through the plan form, gables and tripod belltower. The Scandinavian influenced interior scheme is well-conceived with white plaster walls contrasting with natural stone and timber and all predominantly lit by natural light. Many of the original fixtures and fixtures to the interior remain.

The setting and orientation of the church is well considered adjacent to the housing estate for which it was built to serve. 'The arrangement and rugged design - suggestive of a village church - appear particularly suitable for its hillside site' (Fenton and Walker 2012, p109).

St Andrew's Church was designed by Basil Spence & Partners from 1954 to serve Clermiston Housing Scheme. It was dedicated in April 1957, although work on the building did not officially finish until the following year. Although his practices were profuse in the design of ecclesiastical buildings, notably the renowned Coventry Cathedral, St Andrews Parish Church is the only church built in Scotland by Spence (although Inch Hall Church in Edinburgh was designed by his partner, Hardie Glover). The practice's Scottish churches are markedly different in character from his English ones because of differences in the design team and worshipping practices. Sir Basil Spence was one of Scotland's most accomplished and prolific 20th century architects, with an extensive canon of national and international commissions.

Although the design of St Andrew's Church may at first appear to be plain it is in fact quite sophisticated, with special attention given to religious symbolism. The plan form of the church is unusual with the side walls of the church diverging out until they reach the end wall at which point they converge in to meet one another. Thus the plan is almost kite-shaped and may be regarded as a modern interpretation of the cruciform plan traditionally favoured for its liturgical symbolism.

The design of this church is also inspired by the rural vernacular architecture, as it is reminiscent of harled Highland kirks, reflecting a Scottish Tradionalist approach to modern design finding favour, in particular, in the 1950s by practices such as Spence, Alan Reiach and Ian Linsday for example. In the construction of the church Spence reused stone from the earlier Drumsheugh Parish Church and reinforcing this link with history. The Cross and Ball that top the belltower were covered in gold-leaf and this 'light of Christ' was intended to be seen over the Forth in Fife.

The interior retains many good contemporary fixtures and fittings and the space is well conceived, generally reflecting a Scandinavian influence which was prevalent in churches of this date. The great quantity of windows to the side walls provides an abundance of natural light that reflects from the plaster walls and contrasts with the natural tones of the timber lined roof, the rubble east wall and the timber sanctuary furniture. Spence's office was also responsible for the design of the sanctuary furniture, except for the elders' chairs which were designed by Soburg Mobler.

The church was built and continues to be the axial focal point of Clermiston's residential scheme, which was designed by the award-winning architect John A W Grant and built in 1957. The triangular form that runs throughout the church complements the plan of the estate, which is designed around the form of an open fan.