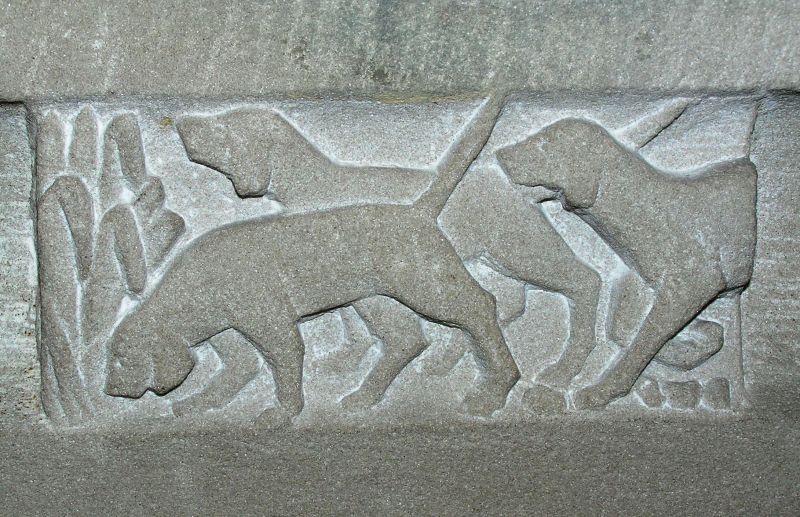 INTERIOR: barrel-vaulted space with aisle, side chapel opening to nave with screen of 3 round arches on square stone pillars, gallery above narthex, raised plinth for Communion Table. Panelled dado and wainscot, latter with pie-crust coping; heavy cornice at wallhead, with carved angels terminating. Winding stone stair to tower, entered through vestry door and overlooking chapel through round-arched opening with balustrade. San Stephano marble flooring (2 shades) . Altar sited to act both as such and as Communion Table; crafted in Botticino and San Stephano marbles, on green slate base, panelled face carved with prayer of King Henry VI. Fine wrought-iron door and church furniture by James Finnegan of Charles Henshaw's firm, such as hinges, handles and balustrade over vestry, and fine Eagle Lectern. All woodwork in figured oak, with fine carvings by Thomas Good of Edinburgh, notably the animal figures on the pew ends, flanking the reading desk, to sides of Minister's desk, and rose and thistle frieze to choir stalls.

An inter-denominational chapel, still in use as such, built to commemorate Robin Tudsbery, the only son of Sir Francis and Lady Tudsbery, who was killed in the closing stages of the Second World War, and to provide the centrepiece of the Thistle Foundation estate, the village for disabled ex-servicemen, commissioned by the same. Sir Francis wrote fulsomely on his belief in ecumenical worship in the Chapel's commemorative book.

The Memorial Stone was laid by Queen Elizabeth on 5th September 1950, as a carved stone by the main door declares. The stone comes from the Doddington Quarries in Nothumberland. A portrait of Robin Tudsbery as a boy hangs in the side chapel.