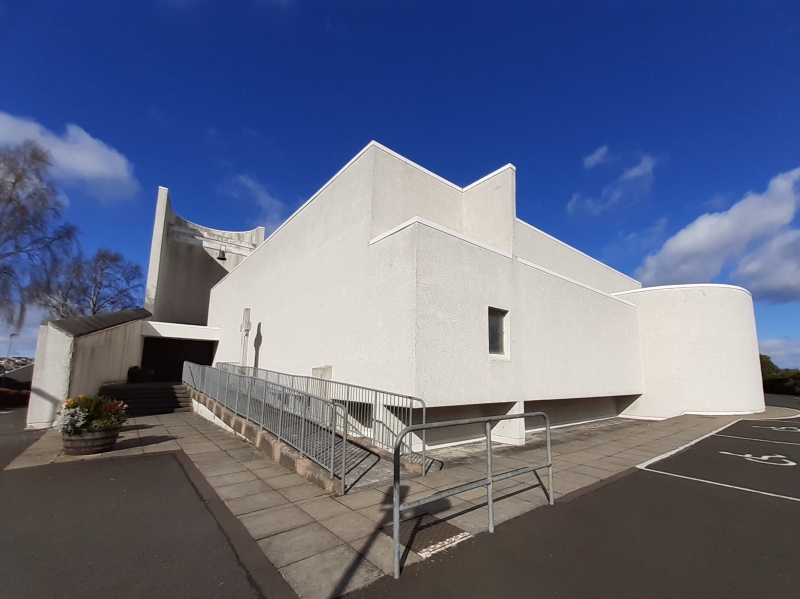 Elders' chairs, with white Communion Table (each with common border motif, string of squares) and raised box-like white Pulpit behind.

Rectangular-plan former church to E of 1966 church (extended seamlessly to W, 1954) with projecting porches and offices, and with partly parallel range of corridor, offices and link to new church.

S ELEVATION: gabled porches off-centre and outer right, each with 2-leaf timber doors to W return, and additional S doors to off-centre porch (1954), with original inscribed stone dedicating 1937 foundation above. Intermediate bays and bays to left with tall narrow windows breaking eaves in swept dormers (3-4). W return of hall with vertical panel of window (former stained glass) with heavily corbelled cill, and louvred ventilator above. Link corridor and offices recessed to left with to left with door and window.

A striking, innovative and unique later 20th century church design following the principles of the Liturgical Movement in plan and conception, its enclosed form and sunken nave reportedly also inspired by the 'conventicle' church and the hillside hollows used by the covenanters in the 17th century. The limited space available on the site made such planning a welcome

contrast to the pitched roofs of the surrounding domestic properties. The 1954 bell is inscribed 'May it peal in the air, and call men to prayer'.