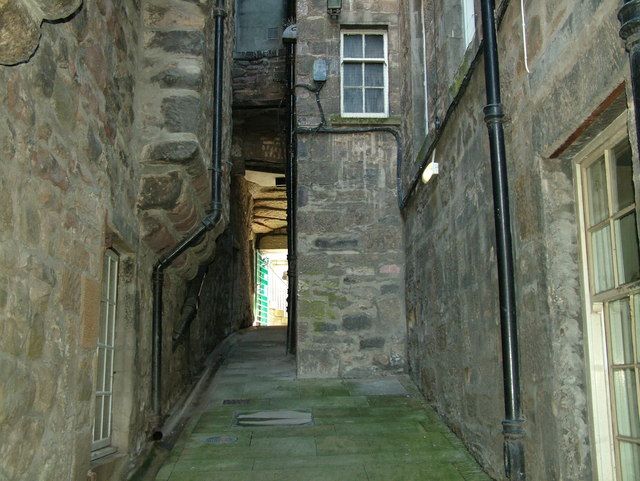 The site of Sandeman House, bounded by Trunk's Close and Baron Maule's Close, is of great historical significance being in the heart of the Old Town. Hope's Close, presently blocked up, lies between these two closes and gave further access from the High Street to Hope's Court, overlooked by the 15th and 16th century rear ranges of Moubray House and John Knox House.

The tenements, known as Ashley Buildings, which stood on the site were built in 1849 as model working-class housing by Lord Ashley (later the Earl of Shaftesbury), the reforming politician who had similar housing ventures in London. The buildings had innovative plumbing, waste disposal systems and air vents but little else of any merit and were partially demolished in 1869 when Jeffrey Street was constructed as part of the City Improvement Scheme. Today the north elevation provides evidence of the taller tenemental form of the building which appears to have been at least 4 storeys in height. The east elevation, formerly a party wall of Ashley Buildings, shows blocked openings of fireplaces and wallpresses with timber and stone lintels. A brick tenement was constructed circa 1862 in the space between the rear range of Moubray House and Ashley Buildings and the projection to the W is a remnant of this.

Sandeman Halls were constructed in 1916, when the area (and the brick tenement) was finally cleared, using material left from Ashley Buildings. They were designated for Moray Knox Free Church congregational use when the Moray and John Knox Free Churches merged and commemorate the Rev Dr John Sandeman (d.1914) of St Andrew's Free Church at Drumsheugh who conducted mission work in the area.

The building was bought by Turnbull Jeffrey Partnership, landscape architects, in 1987 and carefully restored in 1994. Before work began to landscape the courtyard, an archaeological survey was carried out in 1998 uncovering evidence of a massive tenement about 2m below ground, a backland wall, a stone drain and other mixed foundation material. The focal point of the garden is the circular lawn and drystane wall constructed from Caithness stone. The metal sculpture of a cockerel is by Phil Johnson, 1993. The entire scheme was noted for its sensitive and contemporary approach recognising the character of the Old Town, together with a high level of craftsmanship, on its completion in 1999.