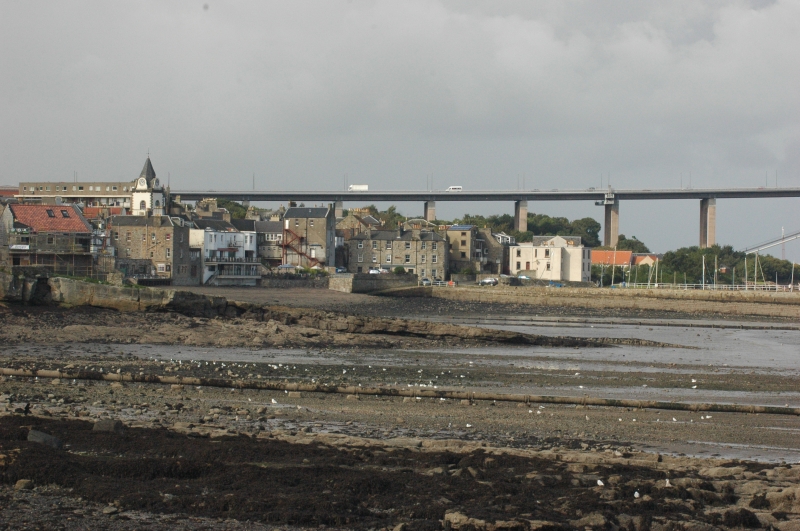 Listing Name: Forth Road Bridge, Including Approach Ramps and Piers

A landmark structure in post-war Scotland, particularly given its location next to the famous rail bridge of 1882-90 (and as a continuation of the tradition of innovative Scottish engineering feats exemplified by the latter). In international terms it was the first spun-cable suspension bridge to challenge American designs of the period. It has an elegance deriving from the lightweight appearance of its slender construction components (American Designs of around this date eg Mackinac Bridge of 1957 and Verrazano Narrows Bridge of 1963 were far more solid and heavier in appearance). When it was completed in 1964 it was the longest suspension bridge outside the USA and the fourth longest in the world (it has a total span of 2828m). The engineers Freeman, Fox and Partners were also responsible for 3 comparable large scale suspension bridges in the UK: the Severn Bridge (1961-66), the Erskine Bridge (1967-71) and the Humber Bridge (completed 1981). Of these the Humber Bridge has the longest main span: 1410 metres, making it the longest in the world when it was built. The Forth Road Bridge and the Severn Bridge have main spans of 1006 and 988 metres respectively. The Forth Road Bridge however stands out as the earliest of all of them. Although the project was commissioned (and the Forth Road Bridge Joint Board set up) in 1947, Treasury Authority was not given until 1958 and it was in that year that construction began. The contractors were the ACD Bridge Company, a consortium comprising 3 separate firms which was set up specially to undertake construction of the Forth Road Bridge. The firms were: Sir William Arrol and Company Ltd, The Cleveland Bridge and Engineering Company and Dorman Long Ltd. Situated just to the S of the S approach is the administration building, by Giles Gilbert Scott, Son and Partners. The southern section is in Edinburgh Parish.