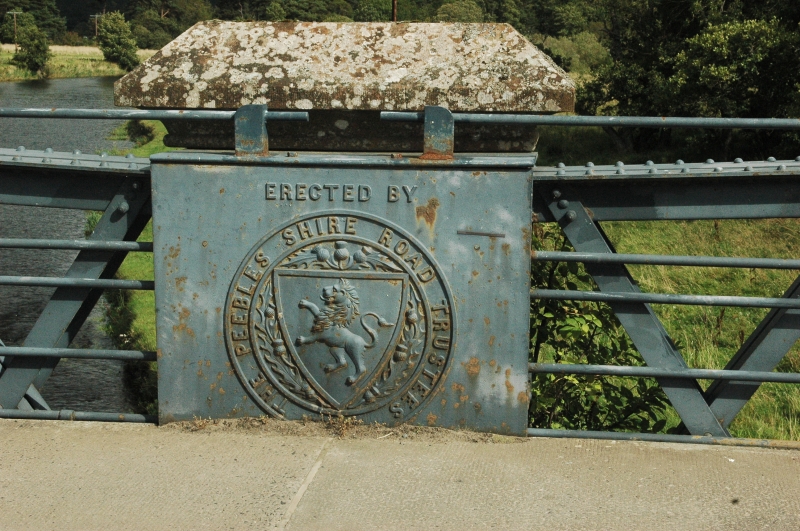 The bridges and roads linking the parishes of Innerleithen and Traquair have an interesting past. The boundary of the 2 parishes is found in the centre of the River Tweed, across which this bridge spans. Although it may seem an obvious choice now, there has not always been a means of crossing the river here. On other bridge sites crossing this river, there were usually fords - one appears never to have existed here. The now lost estate of Pirn was found on the north bank (near Innerleithen), whilst the south bank belonged almost exclusively to Traquair House. The maps of the early 18th century show no roads, bridges or fords in this area, although a ford could be found to the west of Traquair, in the area aptly named Howford. By the end of the 18th century, toll roads were becoming established. On the north bank, at this time, a road appears from Innerleithen skirting around the western boundary of the now demolished Pirn House policies. It is likely the road was built and a boat used to transport people and wares across the river. A small tollhouse was built on the north side of the river and a bridge was formed. A map of 1832 shows the road, a bridge and a structure with 'ferry' next to it. It is known that on this new road and bridge, pontage was also levied in addition to the toll. A more robust timber bridge was eventually built; this coincided with the Local Roads Act in Peeblesshire (29th May, 1830). Under this Act, all the roads in the county were placed under the control of a general body of Trustees. The roads were let annually to the highest bidder whose income relied on the difference between the tolls collected and the sum offered to the Trustees. Most roads were toll roads by 1839. The tolls and pontages were eventually abolished in the county in 1866 (although tolls were not totally abolished in Scotland until 1878 under the Roads and Bridges Act) and the toll houses were sold to the proprietors whose lands adjoined them. A new body was set up in 1866, The Road Trustees. It was under this group that this replacement metal bridge was erected. Although this appeared to be embracing modern technology, the parishes of Traquair and Innerleithen could have had such a bridge years earlier. A local man, Alexander Brodie, had left Traquair as an ill educated blacksmith with 17s 6d in his pocket. He purchased the plan of register stoves from an Italian and became an immensely wealthy and successful 'iron master' ? residing in Carey Street, London and Calcut (sic). He never forgot his roots, and sent money to Traquair for the poor of the parish. It is noted in the New Statistical Account that he also "offered to send cast-iron to Leith ? free of all expense, with which to erect a bridge across the Tweed between Innerleithen and Traquair." This offer was never accepted and the bridge remained a timber one until this was built. The bridge is constructed from many different metals. The majority of it is a combination of mild steel and wrought iron. There are cast-iron components; most notably the large plaques dedicated to its erection, found on the inner parapets. These were cast in green sand. The piers and cutwaters are sandstone ashlar, some of it red. The Road Trustees were a fairly short-lived body; they were disbanded in 1889, when control of the roads passed to the newly formed County Council. The road surface of the bridge has undergone some alterations to cope with the additional traffic found today. A pedestrian path has been added (adjacent to the east parapet) and lights control the now single file traffic. Listed as a fine example of a rural Borders bridge.